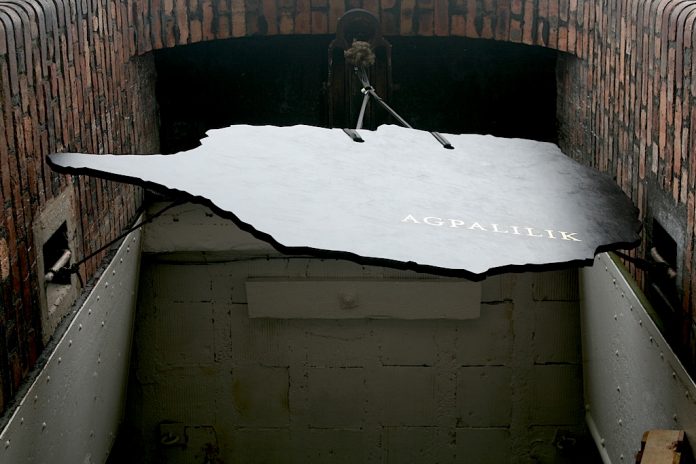 Threshold Festival 2017 is raring up to take over the Baltic Triangle again this weekend. It’s hard to believe it’s been a full year, but the time has come again for the area to do what it was made to do… art. There is a vast amount of creative industry behind the scenes every day in the city’s most creative quarter, there are few times in the year where the Baltic Triangle to be a truly visible creative zone, and this is absolutely one of them.

We’ve taken it upon ourselves to track down some of the most exciting artists behind some of the most intriguing projects for Threshold this year, so over the next week we’ll be sharing their thoughts on these must see works.

First up, John Elcock’s warehouse size meteorite. I’ll leave the details to John, but it was hard to ignore the shift in scale on his work. The installation will be an unmissable addition to the festival, and is a great way for Threshold to prove that they can just keep getting bigger.

The festival put out a call to its fans to help fund this year’s show, and outdid their target, so it’s brilliant to see such ambitious work being announced as part of this weekend’s celebrations.

We caught up with local artist, John Elcock, to find out everything you need to know before visiting his show stopping work at Threshold Festival this weekend:

This seems like a pretty seismic shift from your usual work, in theme, medium, and scale. What led to such a huge installation?

As an artist you are generally asked what kind of work you produce. I tend to refer to myself as a landscape painter, and this has certainly been the main emphasis of my exhibitions over the past three years.

By ‘landscape’ however I use this as a very broad term to describe an environment external not only to ourselves but even to our own world. I paint contemporary landscapes using traditional media, however the subject matter can be far reaching and has included for example my 2015 painting based on the comet 67P/Churyumov–Gerasimenko.

Essentially I am interested in the sense of significance of place and I am drawn to certain objects or places that demand and reward exploration – whether this is expressed in their history, light, geology, remoteness or birdlife. My 2015 exhibition at Corke Gallery being an exploration of the remarkable Scottish islands of St Kilda, or earlier this year at Cass Art I documented a year walking the Mersey shoreline at Hale.

My altruistic hope is that in expressing something of the special character of these places I can help reveal the sublime, and in this respect the sculpture of the Agpalilik meteorite that I have created for Threshold Festival 2017 I see very much as a continuation of the landscape tradition.

What is Agpalilik, and how did you get from Threshold’s brief this year to such a bold work?

The meteorite inspiring the work is one of the largest ever recovered and was discovered at the remote Agpalilik peninsula in Greenland in 1963. It was transported to Denmark where it is now on display in the courtyard of the Danish Geological Museum in Copenhagen. Scientists took over two weeks to cut a cross-section through the 20-ton fragment in order to study its iron-nickel core, and it is this structure I have recreated for Threshold Festival 2017.

The exhibition theme for this year’s festival is Darkness and Light. I knew I wanted to produce a piece that responded to Agpalilik, and there was clearly synergy with an object that came out of the darkness of deep space to have its 4.5bn year old core revealed to the light. I subsequently created Agpalilik as a full-scale reproduction of the Danish cross-section in sculptural form, painted, gilded and designed to be rigged from a building.

Where can we see this work during the festival?

For Threshold Festival Agpalilik will be suspended from the exterior of the Pilgrims Progress building in Bridgewater Street. In this way it imagines a fragment of deep space hoisted into a Liverpool warehouse for its valuable metal content, comparing two great European ports and the idea of commodity. By reflecting on an object that is the oldest thing on Earth I am also interested in how that might change the view we have of ourselves as human.

Scale does play into my work so in the case of St Kilda I created a 1:24 000 bronze sculpture of the islands; it seemed appropriate to try and distil the sheer scale of the volcanic rock into the palm of the hand. In Agpalilik, I felt that a sculpture would be the best way to convey the physicality of the object and that working 1:1 would give it the correct monumentality.

It is a remarkable fact that the crystalline inner structure of a true iron-nickel meteorite is impossible to recreate on Earth. In my installation I have referenced the distinctive Widmanstätten pattern in the brushstrokes on the distant sculpture and provided at street-level a media device that shows the actual meteorite’s beautiful inner structure.

Is it going to stay in place after the festival? If not, what on earth will you doing with it??!!

Agpalilik will be displayed for just three days from Friday 31st March – Sunday 2nd April and will be available to view 24 hours. After the festival I will be adapting the sculpture for sale by making it possible to wall-mount it conventionally for an internal space. Having lived with it in my studio for many weeks I can vouch for its rather unnerving and other-worldly presence.