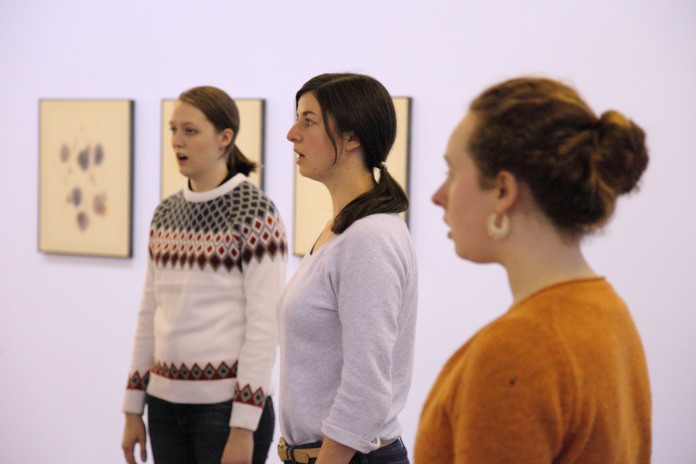 Bluecoat has long been a gallery which has paved the way for more diverse strands of thinking, beyond art. Emma Smith, opening a solo exhibition of immersive sound art next month at Bluecoat, treads new territory, exploring the potential benefits of collective singing, and what that term really means.

I was delighted to find out more about her projections on the future of sound art, as well as the serious and concrete health benefits her work could have on isolated groups further down the line.

With art swiftly becoming less visible from the national curriculum, it is the work of galleries like Bluecoat to explore the cross overs between subjects. STEAM is becoming a buzz word in Liverpool too, adding Art* into the mix of Science, Technology, English * and Maths.

It’s also the first dedicated sound art exhibition that Bluecoat have hosted in their 91 year history as an art centre, so we set out for an interview but probably ended up with more of a seminar from the brilliant Emma Smith ahead of her ground-breaking exhibition opening later this month.

Art in Liverpool: Sound art is an understood medium, but a couple of other more specific terms come up around this exhibition; how does ‘collective singing’ and community effect the work?

If you can’t join in you actually end up feeling quite secluded, so the idea was to see if there was a way of making music that you wouldn’t need to know to be able to sing along and join in with it if you wanted to. So the composition has been created in a way where the public can just come in and join in if they want to.

The score is actually based on public voices as well, so I’m working with members of the public to compose the score. I’m really interested in the way that we all use our voices naturally in a musical way without thinking about it. Everybody’s a musician, we just don’t necessarily think we are.

The idea of the installation then will be, you can come in vocalising and singing along with the work within the space. There’ll be different live performances where different groups have been invited to activate other space, and the other sound work will be a film installation within the gallery, and part of that will be that you can actually get the sound work to tune in to you.

One of the big things you do in human conversation is that you start talking, somebody else comes in with something else that harmonises, and we create these nice patterns together, and I’d like the sound work to be able to do the same thing,

AiL: You mentioned there you were working with members of the community and local groups and choirs. Are they taking quite an active role? How are they engaging in the work?

ES: There’s been a number of different experiments we’re running with different academics, looking at the benefits of singing.

Before that, the members of the project have looked at signing together, but it had previously been with quite traditional choral song. I wanted to say, well let’s try some other types of singing, which are maybe more based on improvisation, and are easier for people to join in without knowing the song beforehand.

We’ve been working with the choirs to look at different ways of singing, and to see how it makes them feel. Do they feel differently, do they feel good as a group, do they feel connected? They’ve been really helpful in sharing what it means to sing together.

AiL: Are the academics from artistic fields, or from other fields?

ES: I’m working with Professor Ian Cross who heads up a research group at Cambridge University; he works across the fields of neurology and music. And Professor Robin Dunbar who is head of the psychology department at Oxford University; he’s a psychologist but he works a lot with the social impact of singing together. And then Lauren Stuart who is based at Goldsmiths, in London, and she’s head of a similar research group that crosses over between music and the brain and the impact.

Her research is very focussed on early years, and the way that we use our voice talking to early-years children. So with her I’ve been working with parent and baby groups to look at ways we can adapt their music in how they talk to their babies. We all sound a bit daft when we talk to babies. But basically what we’re doing is we know that the baby fully responds to the music, because they don’t know what we’re saying yet. We automatically and intuitively make our voices sound as friendly as possible, which exaggerates those musical elements of it.

And there’s another academic, Victoria Williamson, based at Sheffield, and she’s director of the music and wellbeing centre. She’ll come in at the end of the project and see whether there’s a legacy for the project and, after it’s existed as an artwork in the galleries, whether it might have a potential to work in different ways in healthcare settings where the people are socially isolated through their illness.