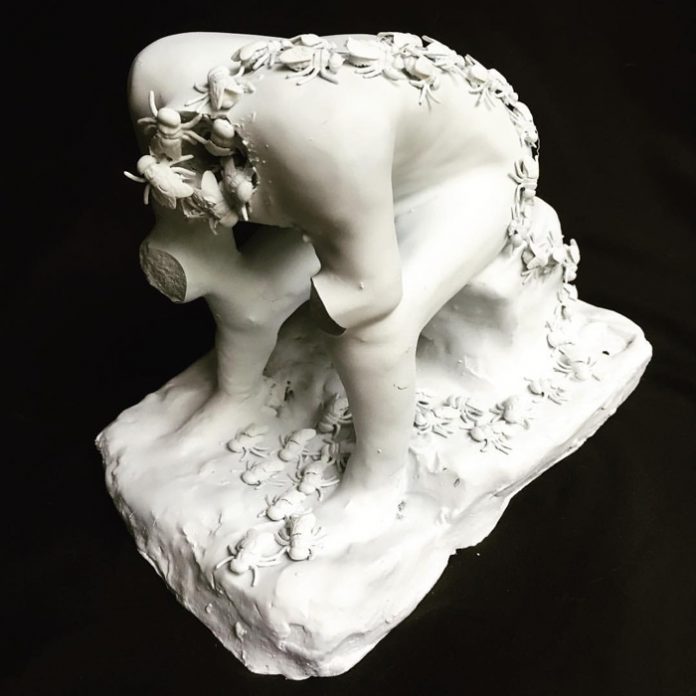 ‘Relics’ an independent exhibition at Tate.

This years Liverpool Biennial chose Ancient Greece as a self-contained narrative encompassing contemporary artists. Alongside antiquities, sculpture and other objects once collected and owned by Henry Blundell it now fits in beautifully with Tate’s own architecture on the first floor gallery. If there was going to be a second installment of everything Greek than where better than to place a small but mighty independent exhibition hosted by Soup Collective International on the ground floor. https://sciartistprojects.wordpress.com

This exhibition offers an alternative to the occasionally baffling thematic ‘episodes’ spread across other biennial venues.  Here at least each piece is featured and created by different Merseyside based artists using found objects. Each piece contains distinct references from Greek Mythology along with plenty of thrills and the usual spills.  Wendy Williams, one of the main organisers, provides some of them. I asked her the following questions….

Why did you choose Relics as a title?

“We toyed with a few titles but thought this one fitted best. The exhibition is the second of several in response to members of the group exhibiting in Athens in May. It was meant to be like an echo or a fragment of our experiences”

What was the brief to the other artists?

“The brief was to take a pre-made item of ceramic and change it. Making their creative gesture. It was to look like an item that had been dug up from an archaeological dig”.

Which work/s do you think best fits in with the Ancient Greece theme?

“There are several that have the markings of ancient Greek crockery, but I like that so many have a modern twist. An object from the present dug up in the far distant future”.

Why does looking towards the past provide artistic inspiration with the present?

“It gives an insight into peoples lives and we can draw parallels with them. Its sort of comforting to experience something that was popular at a time before ours.

When we planned our trip to Athens to take part in the ‘Platforms Project’ at Art Athina we had no idea of the works or narrative the curatorial team would adopt. I suggested to her that the link between themes was fortuitous; she replied, “Yes, we knew the Biennial would have a Greek episode, but at that stage, we had no idea what was going to be displayed at Tate”.
http://www.art-athina.gr/parallel-programme/platform-project/

The works will be on display until 18th September 2016.

Thanks Wendy, see you Friday 9th September for the preview.

Artist of the Week: HIVE Collective