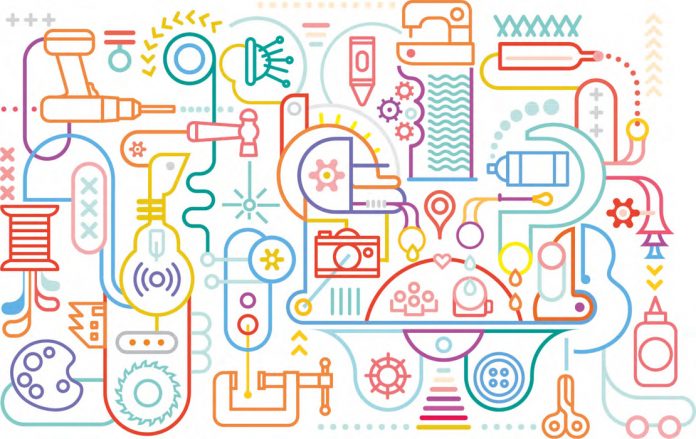 Make Liverpool’s move to their new home on the North Docks means that they have a massive space to fill. The fact they’re keeping their old home in the Baltic Triangle, means they have nothing to furnish it with. So using the familiar Kickstarter format, they launched a Tooldrive; a request to share and breathe new life into old forgotten tools, and pretty much anything else that might have gone forgotten, or gone to junk.

Their aim is to allow these old rusting objects a chance to create limitless numbers of exciting new things. In a warehouse space fit for a festival, their plan is to create an open sourced destination where anyone needing space to realise an idea can do just that.

Art in Liverpool took a quick look around the new warehouse, and poured our excitement onto the page below, but, before you find out about Make, take a look at their Tooldrive campaign film here:

Unlike other spaces that Liverpool has welcomed in 2016, this seems more open, less exclusive. It’s a chance for artists at any stage of their career to be part of something at the start of its life, with the confidence that they can grow as Make does.

The idea of the Tooldrive isn’t just to gather an armoury and make profit from it, it stems from their foundations as 902 in Elevator Studios. The team hasn’t changed much since those days, and their vision definitely hasn’t. Back then they started with a cellar and a team of artists looking to grow, and did pretty much anything they could to facilitate that.

Whether it was clearing space for a laptop or upheaving their entire studio to a new floor to accommodate a full screen-printing facility, 902 never shied away from change. The result is visible today, with a community of studio holders that have garnered international reputations alongside their landlords. All that’s changed is that those landlords have picked a new name and a new building.

The original residents will remain in the Baltic Triangle and continue to make a success of the work they’re already doing, while a new contingent takes a huge step into a new venture with Make’s new North Dock warehouse.

So this Tooldrive isn’t to help Make, not really. It’s to help those new members looking to grow what they do. The Button Boutique, Beautiful Ideas Company, Balance Construction, Ian Currie Handmade Models, Efuse Telecom, Bueller Home, Tracey Nichols and Indigo Stitch, Janie Orrell (art, upcycling, mindfulness) and Ulti Results are some of the confirmed new residents (on a growing list).

So they’re hardly start-ups, with The Button boutique’s Gemma on Channel 4 for most of autumn 2016, and Beautiful Ideas Company having supported a huge amount of inspirational projects on Merseyside since 2015. They’re here to grow though, and that’s seriously exciting.

Well, we asked, and they told:

“Next we are building sheds to house those who will use the workshop, but want a space that is theirs. We want to see a village full of creatives, makers, hobbyists and artists.

We want to see our gallery space used by those people – and external people. To showcase work and to be daring. We’ll always support a good idea!

The meeting spaces will hopefully facilitate the organisational side – and bring people to alternative spaces to conduct business.

Our event and production space has the most opportunity – it’s a huge space that fundamentally we want to keep clear and flexible. We want people to fill this space with productions, builds and events that complement the exciting things happening at Make Liverpool.

Long term we want to create a destination – another reason people want to stay in Liverpool or move here. An asset for the creative community and something for the city to be proud of.” – Kirsten Little, Make Liverpool

If all goes to plan then this really will be something Liverpool can be proud of. A new driving force behind a dispersed cultural centre for the city.

One of the residents, Ian Currie was busy in his workshop while I was being toured around, and was really getting into the spirit of the Tooldrive. His work focuses on bespoke, handmade models built from resourceful, cost effective, materials (often directly recycled). So, whatever happens, whatever tools come in, at least he will be making the most of them!

But within that internal set of ideas there is also MDI, visiting with LEAP 2017 next year, who are planning to make the most of the huge Make Warehouse for their 25th LEAP festival (support MDI’s Kickstarter here: https://www.kickstarter.com/projects/1440652603/leap-2017). The group, one of the UKs leading dance development agencies, are putting a lot of faith into a building that isn’t yet finished. But it’s not just them…

Carolyn Lucas, Green Party MP for Brighton Pavilion, and John McDonnell, Labour’s Shadow Chancellor, have both visited the warehouse, and mentioned Make in speeches at the World Transformed event last September. You’d think A huge socialist convention in the midst of the Labour Party conference would be inescapable for these two, but the draw of this warehouse arts project managed to pull them away from politics and briefly towards culture.

The attraction is in the detail of how Make Liverpool intends to support its residents. They are a community of artists and makers looking to grow, and will do anything to make that work with money at the bottom of their list.

Tooldrive is a perfect summary of what Make Liverpool is about, and gives you a chance to contribute things that will be genuinely career changing to a community of artists that doesn’t even exist yet. So pick up your tools and take them over to Make, pledge your support online, or just make a note that when your computer starts playing up, maybe this time don’t just chuck it out – send it to people who can use it.

Find all the details of how to donate, and what you can donate at www.tooldrive.co.uk

Artist of the Week: Mike Rickett

Artist of the Week: Angie McEvilly