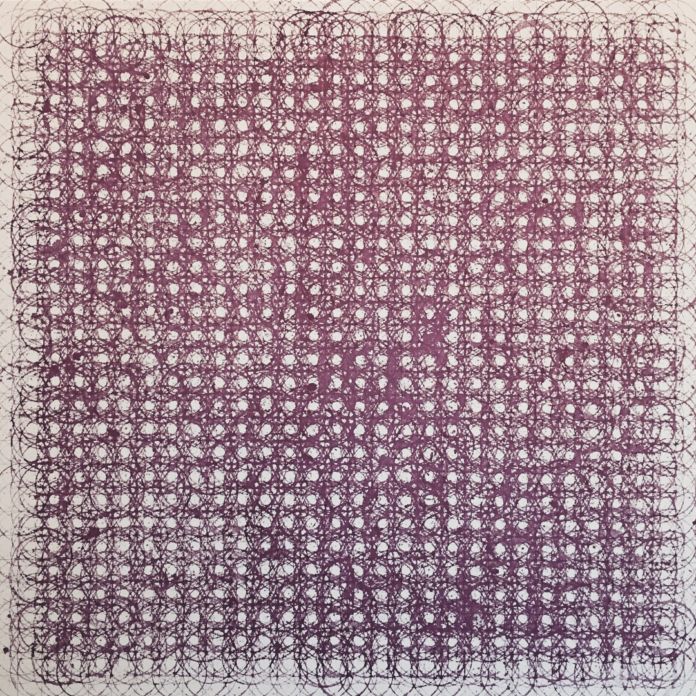 Stephanie Carr’s exhibition, on the top floor of George Henry Lees former department store on Basnett Street, is a series of canvases of varying sizes. Repetitive patterns of printed circles are overlaid on a grid like structure, at times in dense concentrations, at others, sparse and graphic-like.

Stephanie grew up with a parent who suffered from depression and alcoholism from which he ultimately died. Her work is concerned with repetition and the juxtaposition of order and disorder associated with alcoholism. She uses glasses, alcohol and other evocative materials in her work. Repetition is a key element of her work. It makes the work cathartic to produce and mirrors the compulsive addictive behaviours of an alcoholic.

Stephanie graduated from Liverpool Hope University in July 2018. Named as one of the North West’s Top Art Graduates of 2018 by The Double Negative Magazine, she has won numerous awards including the Simon Ryder Purchase Prize, the Corke Gallery Exhibition Award and the Art in Liverpool Group Exhibition Award. Despite being a multi award winning artist and clear rising star, Stephanie is unassuming and unaffected in person. We talked about making work from personal experience, the transition from university to the professional art world and what comes next.

How did the work in this exhibition come about?

When I was 14 my mum passed away and my dad started drinking because of it. When I was nineteen, my dad died of alcoholism. That’s like kind of where it came from. Three years in uni, well 4 years because I had a year out as well because I had a daughter, those four years were spent making work about alcoholism.

That’s where the repetition came in, like, just repeating the pattern – the act of pressing the glass down. That also mimics that picking the glass up and putting it down again.

That was one of the ideas. I wanted it to be about order and disorder, addictions have got an order about them. It starts with the repetitive notion of you repeatedly drinking. Whether it has negative consequences or not, it ends in disorder. You can’t control it, it effects the rest of your life.

It’s more a cathartic thing really. It’s like listening to music or a podcast or something. You just do it, you’re creating it and it takes your mind off it.

Is it the process of making that drives your work?

I don’t know what the end product is going to look like. I draw a grid and then I decide. I’ll use a glass of this size and I’ll use this colour ink and I’m going to print it four times. I think what it might look like half way through and then I’ll just carry on. I usually just do it seeing how I feel.

It’s probably some sort of subconscious thing. Its like being a teenager when you haven’t got much control over your life, its probably just me being controlling. 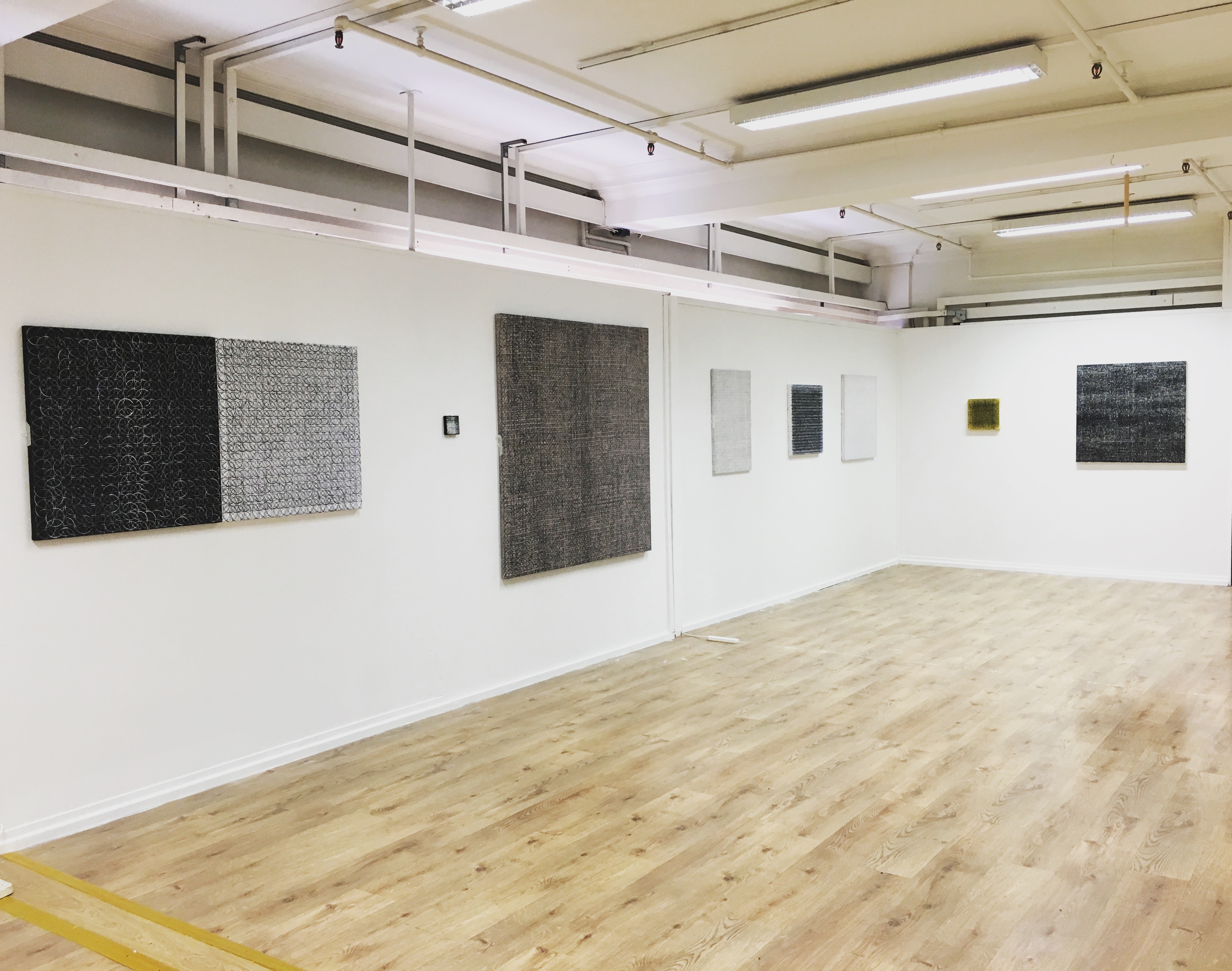 How did you come to the decision to make art about this subject matter?

I knew that I wanted to do art at university. I had already applied before my dad had passed away. I just didn’t know what to make art about in the first year. You do loads of little projects. You can do whatever you want as long as its around these loose rules that they give you. It was coming back to me to make work about that (alcoholism).

It was hard, because when it was going on, you feel like you can’t really talk about it. You want to protect your parents. Once my dad wasn’t well, he was sick in hospital, I started to talk about it in college just before I was planning on going to uni. I think I started to feel more comfortable to talk about it. I felt guilty sometimes, whether I should be talking about that.

I saw a Greyson Perry exhibition two or three years ago in Manchester like big tapestries and stuff. It’s not the same medium but its showing taboo things and things you don’t normally talk about like people on council estates and people drinking. I’ve had a few nice messages whilst my work has been in George Henry Lees. Someone I haven’t spoken to in years said that they went through the same with their parents.

I think the last few paintings I’ve done, I have felt a bit detached, like I forgot what I was making the work about. I’ve made it look a certain way because I think it will look nice, but I’m trying to get back now to where I started. I’m making a painting in the dimensions of my dad, so it’s like I’m trying to bring something more personal into it. I don’t expect anyone who sees it to know straightaway what it is about.

Do you think people need to know what its about in order to appreciate?

No. I think if people just like the way it looks and think it’s interesting in some way. I wasn’t making the work in the first place for someone to feel anything anyway. It was just, I didn’t know what to do with myself and I was like sad or whatever and just started making the work.

How would you describe your art?

I don’t know. I always struggle with that. I think most people would consider it painting but obviously its not paint and I’m not using a brush to apply it. Its kind of like painting and printmaking. Someone else has said that they border on sculpture because the pattern wraps around the canvas and it becomes an object as well.

How do you think your work will develop from this point?

I don’t know. I just like experimenting a lot and just making and trying to do mind maps and things. I’m playing with scale. I think most of them, apart from one in George Henry Lees, are all square so I’m trying to make stuff a bit bigger now that I’ve got a bit more room. I’ve just started one that’s six foot by two foot.

How has the transition from being a student to a professional artist been for you?

Its been a bit of a shock. Its been good to have an exhibition in George Henry Lees, because there are loads of things that you just don’t think about, like people asking about buying my work. I’ve had to come up with a price and I haven’t known how to do that, so I’ve been trying to get advice. I’ve put so much time into it and its such personal work. I might sell it and never see it again.

I think I’ve been quite lucky because I’ve picked up quite a few awards and opportunities. I think my challenge is that I’ve got a daughter and a family now to look after so its more about that really.

What does it mean to win awards at the start of your career?

I didn’t even know I would get it (North West’s Top Art Graduates of 2018). I just thought that someone else would have got it before me.

I was just really happy. The last year at uni I was worried. I think a lot of people are. Worried thinking what am I doing with this art degree? What will I do afterwards? And then for someone to like your work and to get that kind of award.

What comes next for you. Do you have a plan?

Not really, I’m just seeing what opportunities come up. A couple of my friends and me are trying to make a little exhibition in Liverpool near Christmas. One of the awards that I won in uni, I’ve got an exhibition in spring in Corke Gallery.

I was really worried about getting opportunities when I leave, but I’ve got those and it has made me feel a bit more relaxed.

Artist of the Week: Laura Lomax