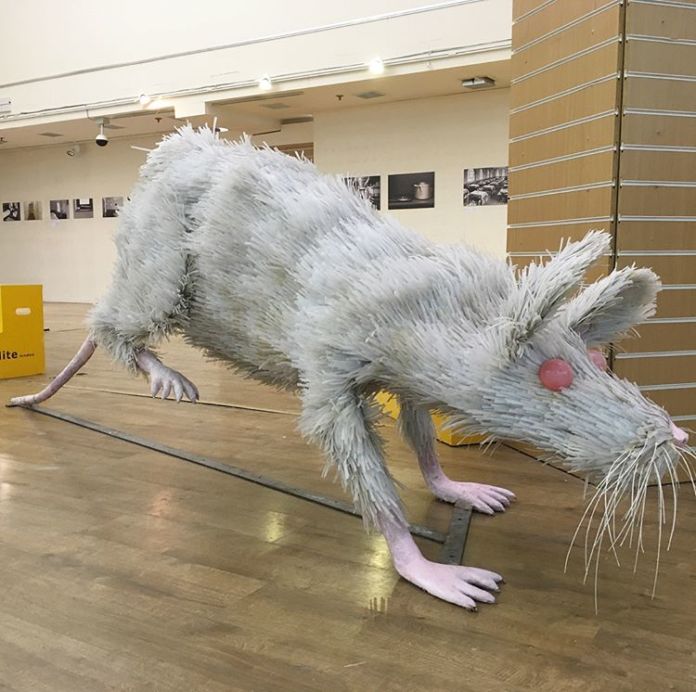 “I want my work to be outside on the street.”

Faith Bebbington’s large scale sculptures, made using recycled materials, are exhibited in both private and corporate settings across the UK.

Her Super Rat sculpture originally sited on top of a wall in the skate park on Jamaica Street, is on display in George Henry Lees during the Independents Biennial.

I met Faith in her studio to talk about her practice, how she sustains it over time and the impact illness has had on her work.

Your work ranges from large scale public pieces to very small sculptures and you seem to be comfortable shifting between the two.

I think piece of work should hold up in any scale. I’ve only started making really big things because I’ve got a big space. The bigger space you’ve got, you expand into it. It’s been a luxury to be able to build things this size. Before, I was at Bridewell studios in a shared space and it was a bit of a struggle sometimes to fit things in the space.

Do you enjoy the physical nature of making?

It’s about getting the structure right. I worked with The Lantern Company for ten years and that’s been quite enlightening to establish how to make things big, really quickly.

I did a collection of small sculptures for DaDafest two years ago (Balancing Act, a series of small sculptures of figures in different poses). I’ve been knocking around with one for two years. I rushed it for DaDaFest and then it came back to the studio. Then I spent, on and off, the last year sorting it out until it was perfect. It was ready for DaDaFest, but I wasn’t happy with it. The position of it wasn’t right and I repositioned it and tinkered with it.

That series was your response to movement and balance?

How long would you spend developing a piece of work?

I used to work in fibre glass resin. I think it gave me cancer, terminal cancer and I stopped using it – I’m trying to stop using it. It’s such a fabulous material to work in. I’ve worked in it for 25 years and I’ve got it down to what I want it to do and then it’s like I have to stop. I’ve stopped, and I’ve gone to this Polymer Clay, but there’s still bits of resin that creeps in.

How has it been to have worked with a material that you are so intimate with and allows you to express yourself, then to have to then stop using it?

It’s been hard. I was sick for a whole year and in and out of hospital with cancer and getting treatment, so I had a lot of time to think about what I wanted to do. To be honest, it has been just a gradual progression to go to the Polymer Clay. I’ve always used these materials, it’s just the balance of how much I’ve used them has shifted. With Polymer Clay I can do that kind of figure and it’s smaller, but that’s ok. And then I can get stuck into this recycled stuff which is where I’m at now.

When I was sick I made the rat (sculpture currently exhibited in George Henry Lees as part of Independents Biennial). I’ve been thinking about making a rat for ten years and I’ve not had the time. Then I had the time. It took me a whole year because I was in and out of hospital. There are two rats. There’s super rat which was in the Baltic Triangle (exhibited on top of a wall at the skate park on Jamaica Street) and then with the cat, there are three little baby rats (exhibited on the Albert Dock as part of the Three Ships Regatta).

What was the response to the rat in the Baltic Triangle?

People love the rat. I thought that it would get damaged because it was above the skate park where loads of kids hang out and those kids get up on the roof, but no one touched it. They liked it which is good, and it will go back there eventually. I think it’s partly because it’s a rat. People have a love hate relationship with rats. But everyone can respect a rat. If you don’t like them you don’t like them. The first week it went up (in the Albert Dock) was the week that they had to shut all the restaurants down in Liverpool One because they had a rat infestation.

You’ve been a working professional sculptor for almost twenty-five years, how do you sustain your practice?

Just keep going. You just gotta keep going – teaching of course helps, do different things and you know I’ve got things like the bowls (Faith has started working on a new series of wooden bowl sculptures). That will sell quite easily. Things like exhibitions, getting a body of work together, that takes a bit more time. I’m happy with commissions as well, that keeps things going. I haven’t advertised, people just come to me which is really good.

It’s taken a long time. The worst year I had was the City of Culture year. The best thing to do is just to keep going and get out there. The rat was my own initiative you have a few conversations with people and then it happens. You know, just me doing the rat off my own bat, has given me a load of work. If you just sit and do nothing and say, ‘oh there’s nothing out there for me’, there won’t be. You’ve just got to keep doing it and eventually someone notices and offers you a commission.

How has your work changed over time?

When I started, I had a lot of demons that I had to get out of me. So, I was a little bit more in your face. I did a lot of heads and arms, things like that, busts. I did a lot of those. I did a lot in paper, and paper mixed with different things and I’ve gone back to that. So that’s changed.

I’ve been experimenting in different ways and returning to abstract work. I used to apply for a lot of hospital commissions. I decided, in hospitals, abstract is really the best kind of work because having been in hospital myself, people don’t want to see pictures of people. They want to see something they can just drift off with. So, I’m trying to develop my abstract stuff more at the moment.  It’s a slow process, because you have to earn a living and also create new stuff.

How do you move to the next thing – moving into using wood and creating the bowl pieces for example?

I don’t know, it’s just been really organic. I’ve not really thought about it that hard. When I thought that I was going to die, I thought, well I’m going to do what I want to do and make things that I want to make without worrying about anything else. I am lucky in that I’m in that position where I can just about do that. So, this is why I got into the wood and recycled stuff.

I want my work to be outside on the street – and that’s the rat and the cat. I call it graffiti sculpture. I used to say that I wanted a piece of work in everybody’s home, that was the mission statement of Ikea. Now it’s more that I want it on the street outside. I’m not a gallery person. Even though it’s what I do, it’s not my aim.

Artist of the Week: LoveArtuk

Artist of the Week: REX