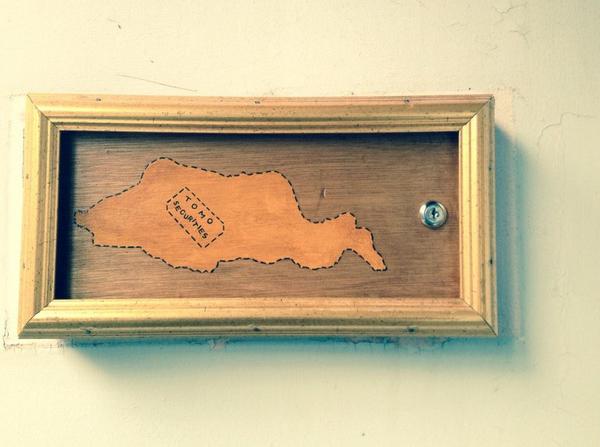 An elusive artist on the Liverpool scene, we caught up with Tomo to find out more about the man behind the street art, locksmithing and his intriguing ‘Biennial infiltration’ at The Old Blind School on the final day of the 2014 festival.

Who or what is Tomo Securities?

It’s just me and a bunch of others really. It started as a solo thing when I once lived in an old art studio / warehouse and learned that it wasn’t legit to live in an industrial building unless you were providing 24 hour security. So literally overnight I became a security guard, I never envisioned it but it felt quite natural and I began to read up on all manner of security etiquette. Occasionally others would be down and then a couple of years ago I created this recruitment programme in the form of a mail art project and loads of people signed up (some applications rejected, some still pending, some intercepted / lost in transit). Now it’s somewhere past the three figure mark and spans several countries. Recently we got some vending machines & expanded into the contraceptive game selling condoms. I’m also partial to a bit of locksmithery. Tomo Securities offers you protection.
Tell us a bit about your background and yourself as an artist.
Nothing that special really. I started drawing from a young age like most kids and then got into tagging cos it was more fun. To be honest I don’t know what to say when people ask me to talk about myself; it’s not like I don’t know who I am or anything, it’s just uninteresting to me. Maybe I’d prefer to see people try and figure me out for themselves rather than regurgitating a bunch of probably quite subjective answers? When you put the pieces together yourself you get a better picture. I was round at a friends place the other night and she said my style had a kind of 70’s euro terrorist vibe about it and I was like “fucking right, nice one”. It hadn’t occurred to me quite like that before but it made perfect sense. I listen to a lot of old library records, have travelled Europe extensively, and love many kinds of clandestine activity. 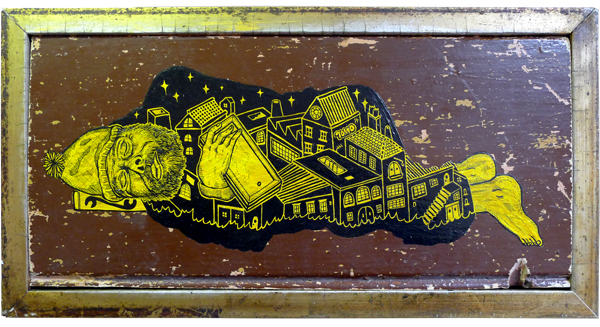 On your website you say “One is clean, legit and widely accepted, while its long lost twin is filthy, unscrupulous and outcast” is this a reference to street vs more traditional and ‘socially acceptable’ forms of art?
That’s it, no one has to look over their shoulder in an art gallery or studio (unless they’ve done something out of place there), it’s a relatively comfortable atmosphere. On the other hand a career in uncommissioned art can take you to places far from the comfort zone. Although in essence both are the same thing, same shit different place, any aesthetic differences are purely down to the environment and the type of people involved. As for traditional I don’t think either is more so than the other.


Recently you ‘infiltrated’ the Liverpool Biennial Exhibition at The Old Blind School – what happened and what statement were you hoping to make?
We pulled up in a car outside and just rolled in there with some tools stuffed up our jackets. I’d been scoping the place out quite a bit so I knew some of the girls on the desk to say hello to. I found out a lot of stuff about staff changeover times, invigilator positions and the general layout of the place. My accomplice distracted the attendant while I installed the work and hid the key. I was hoping that the Biennial would be good sports about it and play ball but that wasn’t the case and after an hour or so they took it down. The next day I did the same again except I used more heavy duty fixings and released the following statement: 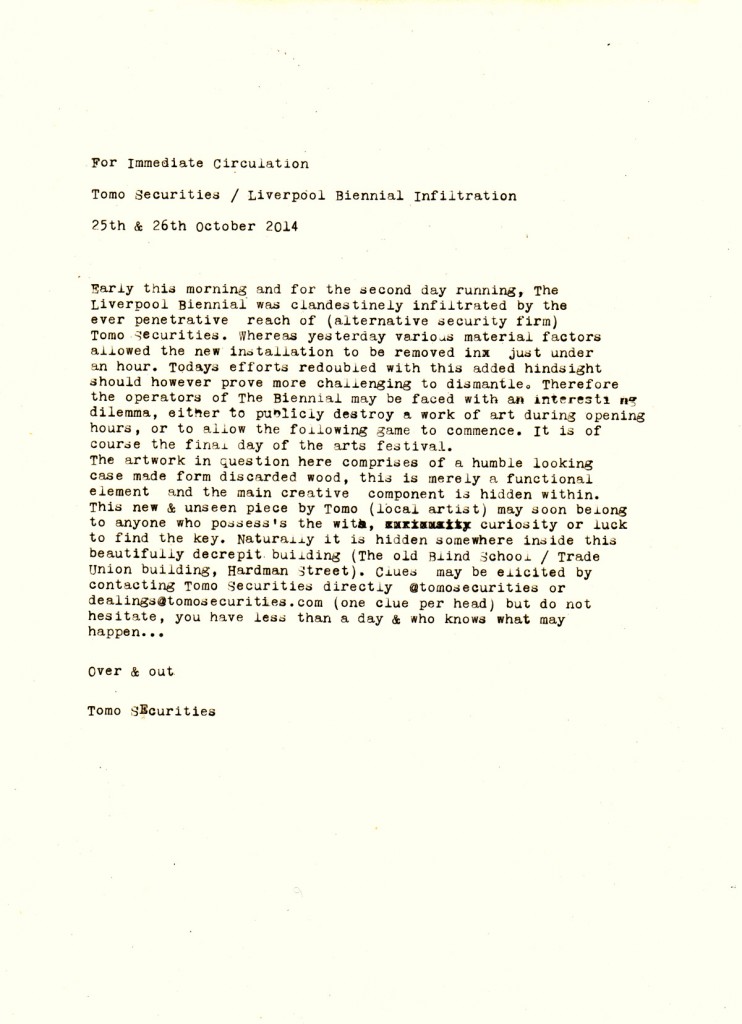 It evened the score alright and before long my inbox and Twitter feed were flooded with requests for clues. To explain it, the artwork was hidden inside a locked box and belonged to anyone who could find the key. A real live treasure hunt with everyone invited and not only that but I responded to their theme of A Needle Walks into a Haystack. Now anyone could get it, whereas before it was something that made almost no sense whatsoever like the majority of artspeak. As you can see the artwork inside depicted a sleeping homeless man, who everyone wanted to take home. He’s asleep because I painted him without going to sleep, and would smuggle him into the building while the Biennial slept. Also check out this secret (until now) recording of it’s de-installation:
According to your website, you have an apparent fascination for marker pens – what’s the attraction?

They’re just really good and you can take them anywhere. 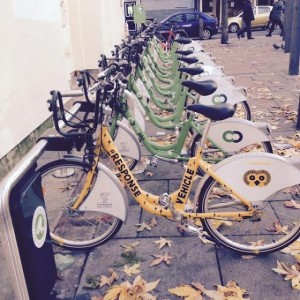 Fair enough! You have collaborated on exhibitions with other local artists – what do you enjoy most about working with others?

Well it’s just nice to have someone to talk to while you’re working, as most of the time I’m quite solitary. I also get bored of exhibiting on my own & I think it can be interesting when you have different personalities at work in the same place, be it either a rusty door or a gallery wall.

Can you tell us a bit about the city bike you recently customised?

Well it was another one of those things that was just too much fun not to do. I gave it a new paint job and redesigned it as a response vehicle, which in turn was a response to cycling becoming officially recognised by the council. The best part though was that after it was back in circulation anyone could hire it and have any response they would. It swiftly disappeared later that same day, however, and now we can only speculate as to its whereabouts, although the response was significant. Any info or sightings feel free to drop me a line.

Where are you favourite places to see art in Liverpool?

Do you think there are enough opportunities and platforms for local artists?

It depends what you want do. There are plenty of walls inside and out, but if you wanna have some influence on the shape and direction of the city, well that gets harder. The keys to the city are more and more in the hands of so called ‘developers’ – they’re the real infiltrators. Creative people need to play a part cos if it’s left to the money men everything will end up looking the same.