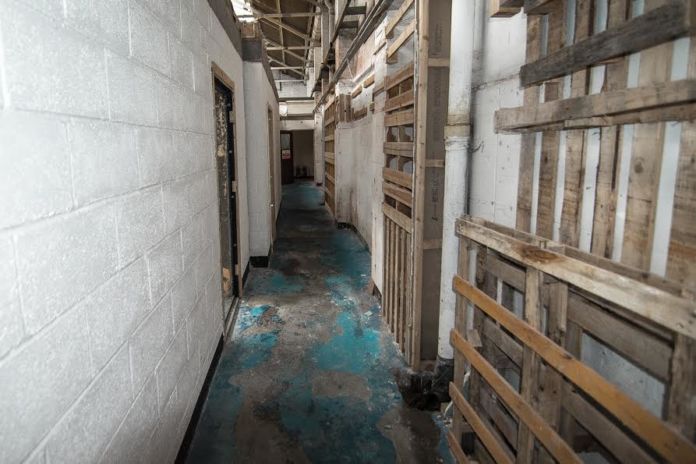 With Threshold V just around the corner, and more visual artists being added to the programme every day, we thought it high time we caught up with the brains behind this year’s exhibition strand: the curators, Jazamin Sinclair and Andy Minnis.

This year’s theme is Contrasting Geometries – tell us more.

We start thinking about visual identity and themes for each festival as soon as the last event itself finishes. Ideas develop through the summer months and the team starts talking about the approach we want to take. This year is the 5th festival and we’re in 2015, 5 = V in Roman Numerals so we arrived at the name ‘Threshold V’.

Thinking of Roman numerals led us on a thought process of considering Empire and Imperial power. Influenced by trends we were seeing in fashion, advertising and product design around us, we started thinking about geometry and connected that with the patterns and straight lines which dominated British Imperial architecture of the early 20th Century and artistic trends in Russia in the same period, from Constructivism to Soviet propaganda. Working with our new lead designer, James Kirkham (aka IXIOD), a new brand and identity was born for the festival reflecting V in repeating geometric patterns.

We then talked around the idea of how V = versus and initially came up with the concept of artificial vs. natural geometry but then broadened this to allow more scope for interpretation and arrived at the final theme of ‘Contrasting Geometries’. There are many contrasts in the natural and built environment that can be explored but the golden ratio, or Fibonacci spiral, is a great example of how this translates geometrically and visually is a really interesting concept to explore.

So the ‘V’ is an important element of the theme?

Absolutely, we see V as ‘versus’ in our exhibition theme and artists have been asked to explore and interpret Contrasting Geometries and the tensions of versus through their work. We will highlight this element ourselves in curating the exhibitions; we may have spaces that have contrasting geometries within them, such as a room with a natural installation piece exhibited alongside some striking photographs or paintings that are man-made or synthetic. We expect that some artists (especially site-specific/installation artists) will react to the exhibition space they are allocated. There could be an installation that has a completely opposite feel to the room it is in and this will highlight contrasts in geometry. 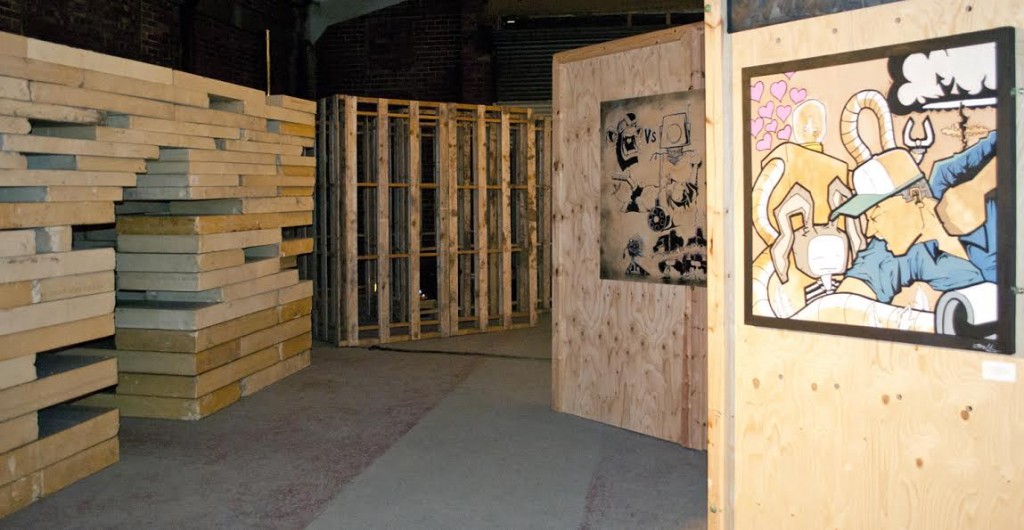 How do you select the participating artists and when does the process start?

We open applications late summer each year and start reviewing as each comes in but the real work starts when the window closes, which was 31 December last year. We had over 60 applications and have been looking through each submission over the past few weeks. We have made some decisions about what we think will work and will meet very soon to discuss our ideas and thoughts and will then make some decisions about which artists we will be including in the Festival. We have to be quite discerning in our selection process and because of space constraints may only be able to accept a third of entries. Our emphasis is on including strong, high quality artwork that also fits in well with the theme, the festival and the exhibition spaces.

Is there a connection between the art and the music in this year’s festival?

Jazamin: There are an increasing number of multi-disciplinary artists around, including myself. In the past I’ve noticed there are lot of people who will be playing a gig at the festival who are also exhibiting artwork or involved in a theatrical performance. A lot of these people are then involved with volunteering to help at the festival in some way. So there could be an artist as part of our exhibition who is also helping out behind the scenes as a sound technician. It’s been quite amazing to realise how much talent all of the many people involved with Threshold Festival have. Talking to people at the festival, there have been conversations where you’re like “Oh wow so you’re a really good singer & guitarist in a band but what you’re also an events manager and a photographer, oh and you run workshops and you’re doing what – turning your garage into a music studio? Cool – do you ever sleep?!”. So, yes, there’s always a connection between the art and music at the festival.

Andy: With the theme of Contrasting Geometries, we have tried to link the visual arts exhibition closely to all other aspects of the festival. There should be a strong cross-over between the exhibition and venue dressing and, as every year, we’re planning to have live art happening in some of the venues whilst performances are taking place. Some musical performances will include visuals and we hope the Contrasting Geometries theme will influence some of this work as well.

Installation view of part of the [FUTURE | VISIONS] exhibition at Unit 51, Threshold 2014.

What do you think the highlights of the festival will be this year?

Andy: I’m excited about using Constellations for the first time, it’s a new venue but has already had some amazing parties, we’re looking forward to taking it over for the weekend. The main venue for our exhibition is also pretty exciting, it’s a big warehouse space with a huge amount of potential and we’re very lucky to be able to use it so early in its development. For the exhibition itself, the quality of submissions has been very high this year but we’re still putting everything together and don’t want to give away too much. We’re both really excited to see how new artists will use the platform we provide and how returning artists have developed.

Jazamin: From the music line-up so far, I’m really looking forward to seeing Nubiyan Twist, Paddy Steer, Mersey Wylie, The Soul Rays, Elevant, CuT, Dave O Grady and Little Sparrow. A big highlight for me every year at the festival, especially by Saturday night/Sunday afternoon, is the theatre, comedy & talks. I’m not involved with organising that side of things and usually (if I’m honest) by the time the festival is in full swing, I’ve been known to be a bit tired, grumpy & generally sleep-deprived so I always go and find a dark, relatively quiet, warm theatre space/bar where I can sit and listen to poetry or comedy or watch some theatre. In previous years I have always enjoyed Impropriety’s improvised theatre which is excellent and incredibly funny! Last year, I also really loved hearing ‘Greg Wilson in conversation with Bernie Connor’ as the festival was drawing to a close on the Sunday afternoon and I’m hoping for more stuff like this. 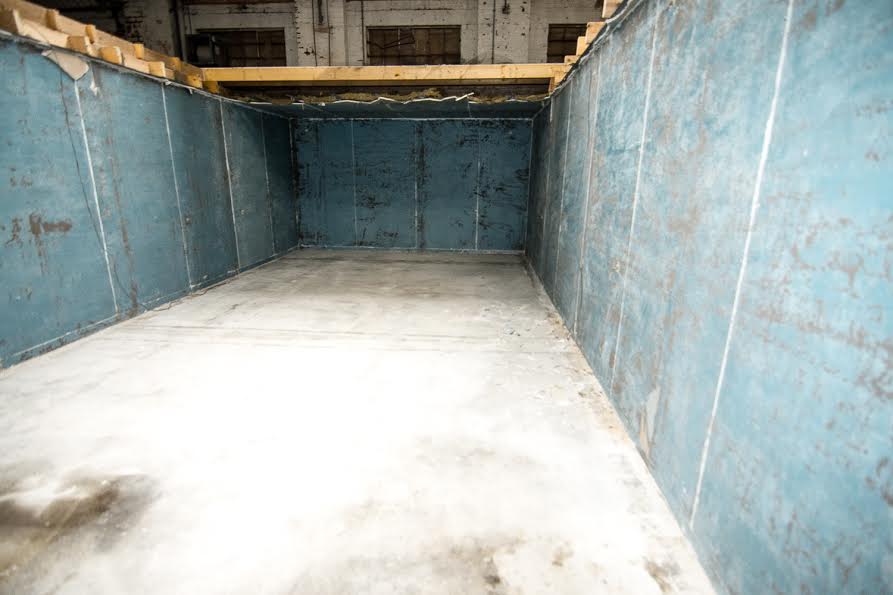 We loved the sneak peek picture (above) but can you tell us anything about the as-yet unannounced main venue for the exhibition?

Andy: Well, we don’t want to reveal too much, but it’s a former Rubber Factory in the Baltic Triangle which will be transformed into a new brewery and bar space later this year, by a certain local business that has worked closely with the Festival over the past few years. We’re very lucky to have access to the space and plan to use as much as we can for visual arts and other performances over the weekend. The plans are still being finalised but watch out for more very soon!

Wow, we can’t wait! Can you tell us a bit about yourself and past projects?

Jazamin: I am a multi-disciplinary artist and musician. The majority of what I do is creative; I sing and play guitar, I am a photographer, I paint, I draw and I design things. I have been a practising artist and have been organising exhibitions since I left university in 2002. I have been around art, design, music and performance all of my life and all of my close family are creative in some way. You can find out more here: jazamin.co.uk

In it’s first year, I got involved with Threshold as an external promoter with HeadSpace@EggSpace. That year we had a concurrent exhibition in two venues: The Egg Cafe & The CUC. We called this ‘Twinned’ and included work by each artist in each venue. This was alongside another exhibition of many other artists work curated by Ingi Thor Busk at The CUC which was a massive building. Kaya, Chris & Andy wanted to have visual arts in all of the gallery spaces as well as in some random places that people would discover. We were asked to return the following year to organise another exhibition at the festival. In the summer of 2013 ahead of last year’s festival Kaya, Chris & Andy asked me to become head of visual arts and a fully fledged team member, working closely with Andy.

And finally, what other projects have you got lined up next?

Jazamin: I plan to develop my music, painting & photography and hope to travel a bit more with this through playing gigs, exhibitions and by expanding my horizons in terms of where I go to take photographs. I am in the process of working on a debut album with my band Moxie. We now have enough original material to start recording. It has been quite a long process to get to this stage but I’m very excited as it feels as though we are finally ready!

Andy: In the past year I moved from Liverpool and now live in London, working for UCL (University College London). In between my day job, I’m working with a group of researchers and artists on a project to explore the tensions between health & safety and creative practice. We’ve held several workshops and plan to hold an exhibition in the University later this year. Outside of UCL, I’m hoping to start working with a festival similar to Threshold in London and have started approaching a few organisations. Maybe one day we’ll have a Threshold – London event!

Threshold 2015 takes place from 27 -29 March. To buy tickets and find out more about the line-up, visit thresholdfestival.co.uk