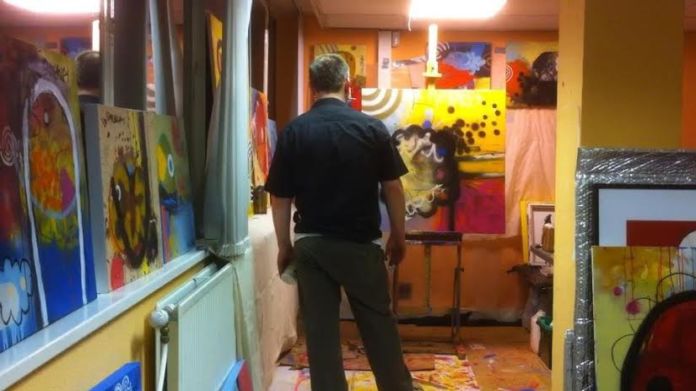 Born in Chester in 1973, Nathan grew up in various places around the North West of England including Salford and Warrington. He went to Culcheth High school between 1985 and 1990. He studied Art & Design at Warrington Collegiate Institute from 1990 to 1993, and then Fine Art at Liverpool John Moore’s University from 1993 to 1996 (specialising in painting). He later stayed in Liverpool and is still based there today. Nathan continued to paint after he graduated, however he did not begin to exhibit regularly until 2006 due to family commitments.

He was awarded a place in the 2007 Chelsea International Fine Art Competition in New York as one of only a few artists selected. He was also Prize-winner at the 3rd and 4th Wirral Open exhibitions at the Williamson Art Gallery, and was selected for the ‘Best of Merseyside’ Exhibition in 2008 and the ‘Art Merseywide’ Exhibition in 2010. He also won 2nd Prize in the 2011 West Lancashire Open.

In 2006 Nathan looked to expand his portfolio wanting to turn to extra mediums. He took to taking photographs not only as research for his paintings but as individual works in their own right. He approached photography very much through the eyes of a painter, producing out of focus abstract images from all kinds of angles. In 2007 he won a place at ‘The International Chelsea Fine Art Competition in New York’ for his photography. Nathan does of course still paint, but his photography and painting now sit side by side in his portfolio and he also plans to expand into other mediums when he can.

In 2010 Nathan became a father for the first time. This became a major influence in his paintings to come. His painting was still very much abstract and featured elements of the city without being totally direct in figurative or representational terms. But, colour became a much stronger feature in his painting, and is still there today. Innocence and fatherhood being on his mind now add a new edge to the painting.

With an adept eye for composition, Nathan’s recent series of paintings are highly charged abstract works. He is inspired by what surrounds him in his day-to-day life. This in his case is a mixture of; the city of Liverpool, and also becoming a father.

As a ‘Dad’ his painting has definitely changed, becoming more colourful for one thing, and he would, if asked, describe his paintings as ‘happy art’.

However his paintings continue to grasp elements of the urban environment, and the presence of man within it, producing associations and glimpses without being totally direct in representational or figurative terms.