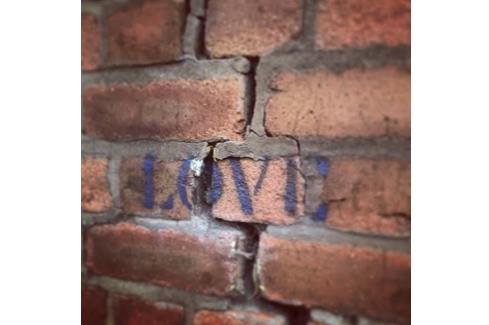 Art in Liverpool has been following the work of Jay Wheeler, aka Love Artuk, for a while, and thought it was time that Liverpool heard his story.
Who or what is Love Artuk, and how did you become an artist?
Love Artuk is a guy with a story. After 12 years in the Army, I came home from Afghanistan in 2011, having lost a friend and colleague. Six months after I returned to the UK, I had a mental breakdown and was admitted to several psychiatric hospitals in Liverpool after attempting suicide several times – almost succeeding more than once. It was whilst I was in hospital that I came to find art as my therapy, even though I hadn’t done any kind of art work since I was at school and it was a subject that had never really interested me before. I decided to use ‘Love’ as my theme, the good side and the dark side of it. Creating art pieces with a mix of acrylic paint and spray paint, I use my ‘Love Art’ to highlight Love to each and every one of us.
Thats an incredible story – how did you progress your work from there?
Eventually Love Artuk was born and I had my first exhibition in Liverpool’s Clove Hitch gallery. The night was a success and received reviews in Your Move magazine and Seba Rashii culture magazine, who have since worked with me on several projects including the annual Wirral Earth Festival. In 2013, I also won the Templar Art Award, received emails of support from Banksy’s PR company, and have also had several articles about my work in Mersey Care magazine. Since then, I have had 4 exhibitions which has included the chance to exhibit at the World Museum in October as part of World Mental Health Day 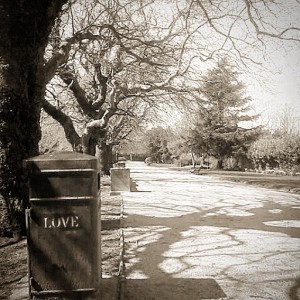 Your work appears on streets and buildings around the city, and you mentioned Banksy earlier – would you call yourself a graffiti artist?
I would call myself an ‘urban street artist’ because that’s what I do; I spray the Love tag in any colour. When people notice the word and pause for a few seconds concentrating on what ‘Love’ means to them, that is my message coming through.
What do you hope to communicate through your work?

I am raising awareness of issues surrounding mental health and the positives that can come from those experiences. My diagnosis is PTSD (Post Traumatic Stress Disorder) and EUPD (Emotionally Unstable Personality Disorder). Since I had the breakdown back in 2011, I have felt like I have been completely re-born and it is my mission to continue to spray ‘Love’ whenever and wherever I can. I can accept that we all have rules to abide by and that what I do on the street is questionable to some, however, it is enjoyed by many so this is a rule that I am willing to break on a daily basis for the sake of the Love Art message.
We’ve heard that you are a firm believer in making a difference for charity through your work.

I am a supporter of several charities including MIND, childrens charities and Milewalk fundraising, to all of which I have donated profits from the sale of my work. I am lucky to know that Mersey Care NHS are 100% behind me in everything that I do, and so for every sale that I make, I always donate a percentage to mental health organisations in Liverpool. A lot has happened to me over the years, and I thank God and the positive people around me for their love and support which keeps me focused on my Love Art message, and out of hospital. 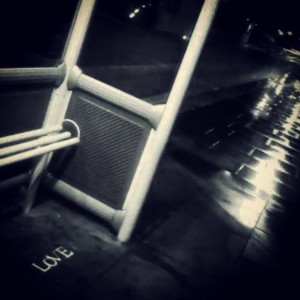 You were recently involved with the art fair at the Former Seaman’s Orphanage in  Newsham Park – how did you get involved and what was that experience like?
I was approached by organisers Angie McEvilly and Anna Di Scala who asked if I would like to be a part of the event and I said yes without question. The building had particular interest to me, as at some stage it was also a psychiatric hospital so I felt a connection with the idea of opening it to the public and filling the space with art straight away. The whole event was amazing in every way and I got to meet some outstanding artists and visitors.
And what’s next – do you have any big projects planned for 2015?

2015 is going to be a busy year for Love Artuk and I wouldn’t want it any other way. My first ‘off the wall’ film documentary based on the story behind Love Artuk is currently being edited over in New York by Conception Events, and I am also working on an outdoor installation collaboration with Eden Art in Liverpool. Next, I am planning a 4th project with Seba Rashii culture magazine which will take place in early 2015 and will bring together Liverpool, West Kirby, Manchester and London. I also have two future projects planned with Mersey Care in mid-2015 and I will be exhibiting a piece of my work at Tate Liverpool as part of a show by Broadoak Unit Occupational Therapy Dept. Liverpool.  Lastly, I also have an exhibition coming up in February where I will be working in partnership with Neurosupport Liverpool.
It looks like 2015 is going to be a fantastic year for Love Artuk and we look forward to seeing more from this local artist – you’ll always have the support of Art in Liverpool.

Artist of the Week: Niamh O’Malley