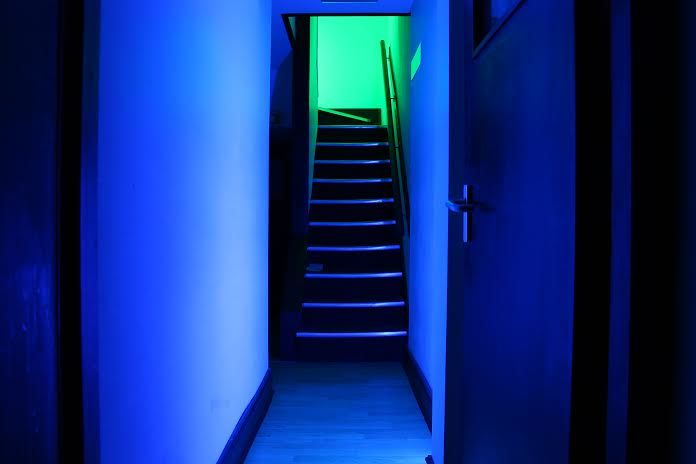 Following his pop up light installation experience on Duke Street at the beginning of May, Art in Liverpool decided it was high time to catch up with artist Danny Ryder, and find out which artists he admires and what he’s looking forward to for LightNight 2014.

Hi Danny, tell us a bit about yourself

My name is Danny Ryder, and I was born and raised here in Liverpool. I am currently studying Fine Art at LJMU and have just finished my second year (and am still awaiting my results). My art practice focuses on the relationship we have with, and the interaction between colour, light, space and surface.

What inspired your last project, kulle.houzz?

kulle.houzz was essentially born out of boredom and frustration with my uni work. So I set my degree stuff aside and I revisited the idea I had been toying with of a fully enclosed space that I would then project coloured light into.

In order to gauge what size room I would need to build and how many lights etc… I started with a small room I already had access to, my bedroom. It didn’t take many bulbs to fully submerge the room in colour, and since the idea was to then scale up from my bedroom and building a series of rather large rooms would require an even larger space to house it, a house, my house, seemed like the logical venue. 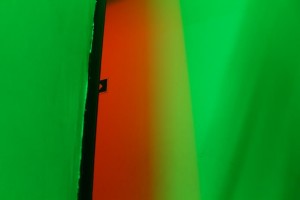 Where did the title come from?

Well, kulle.houzz is phonetically identical to colour house, and that’s exactly what it was: a coloured house. The spelling itself took about a day to work out because certain variations either looked wrong or were too common, for example haus. Funnily enough, kulle is actually Swedish for ‘hill’ and Duke Street itself is a constant hill rising from Hanover Street up to Upper Duke Street and onto Canning Street, so that kind of set the kulle part in stone for me purely down to this coincidence. Houzz seemed more original than haus and fit the form of being phonetically correct, whilst being grammatically incorrect.

You work with installation and immersive environments – what makes you interested in engaging your audience so physically in your work?

I had been making light sculpture for a while, but these were only really pretty objects; that was all well and good but as a viewer it can become a little dull walking around an exhibition, especially with an invigilator/gallery assistant ready to shout “Don’t touch!” as soon as you step towards a work. Maybe that’s just me, but I often found things that you actually interacted with, things you could be a part of, stuck with me more; I enjoyed them more and I had to think more about them, so by engaging physically, it removes that somewhat passive viewer role and in turn allows the viewer to become a part of the work themselves.

I want people to go see my work and just enjoy and have fun with it! 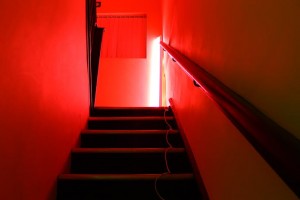 Which artists do you admire, or who inspires you at the moment?

I have a list on my desktop which I jokingly refer to as the ‘Hit-List’, so I’m adding new artists to it all the time. Of them all, I’d have to say the most influential one and the main reason I started doing art in high school is Dan Flavin. He definitely influenced me with regards to medium. Some more recent additions to the list are Timm Ulrichs, Leo Villareal and Yayoi Kusama.

What will you be going to see on LightNight?

Unfortunately I have to work, but JAR Collective have actually asked if I would like to help out at their exhibition Stepping Outside The Cube so a little bias would say go see that outside The Kazimier. If I wasn’t working though, I would make sure to be going to have a look at the Reginald Orme & Richard Hughes exhibition at Fallout Factory, week four of The Royal Standard’s Testing Bed, and Antonio Roberts’ SYNDROME in Ropewalks Square. Hopefully catching some of the Street Performances on the way round. Bring The Fire Project: Japanese Fire will no doubt make for some brilliant photographs!

The Rough Guide has recently voted Liverpool 3rd in the top ten places to see in the world in 2014. What are you looking forward to in the city this year?

Wow 3rd in the world! It’s a hard question, there’s so much stuff! LightNight up until I saw the rota for the week, The Biennial, Mondrian at Tate, Warhol at Tate later in the year, all the degree shows, Liverpool Art Fair, Liverpool International Music Festival, The Open at Hoylake, and of course Liverpool Pirate Festival …and that’s to not even scratching the surface of what’s happening!