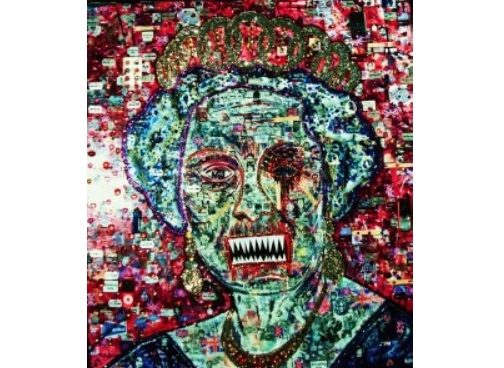 Ben has been making collage all of his life. From the moment his mother provided him with an out of date Kays catalogue, some glue and her dressmaking scissors at around 7 years of age he has been manipulating found imagery.  His recent work is concerned with the conflicting themes contained within the information we are constantly bombarded with in the contemporary world.  Our lives are saturated with imagery communicated to us via the internet, television, advertising, film and social media. This is simultaneously overwhelming, fascinating, beguiling  and alienating.

This collective experience can be seductive and sedating. It can be liberating and constraining. It may also be a mirror for personal insecurities and preoccupations. The work attempts to confront notions of the human condition within this complex cultural landscape. It questions the relationship between glamour, mortality and immortality through the juxtaposition of organic forms and artificial materiality.

Death is really the only thing that unites all humanity. The physical body will vanish but your Facebook account is left behind like a digital version of the Turin shroud. His work is a handmade product of the digital age.

Ben’s recent exhibition at 81 Renshaw Street signified the premiere of his most recent work entitled ‘Holy Trinity: The Father, The Sun, and the Holy Ghost’. A violent marriage of the imagery with which we’re bombarded every day in the media, it assaults the senses with an unflinching, grinning knowingness. Across the eight pieces, staring eyes and cruelly fixed smiles are etched into a mass of broken glass, syringes and sequins, daring us to come closer.

Beneath it’s rotten skin and shards of glass – it questions what it is about us that makes us want to pick up a newspaper, log on to a gossip site, or sit slack-jawed at the news. We want to be shocked – but the more we see, the less impact those images have.

The collages that riddle the canvas are a mass of faces, slogans, symbols… all that have haunted the media-hungry public for a century…

The dead-behind-the-eyes mugshot of Myra Hindley, crucifixes and swasitkas, the scare-mongering AIDS headlines of the 80s, sitting side-by-side with media whores like Lindsey Lohan, 50 Cent and Paris Hilton. Images of hope and images of fear and greed vie for attention. Whether it’s Charles Manson or Charles Hawtrey, their smiles are immortalised in print, and sit like a scar on the collective psyche. The new work draws together a selection of paintings created in the last 3 years.

Ben questions the iconography and morality of human behaviour in the media age, and this is the beating heart of his work. Across the 8 pieces on display, the devil is every detail… you just have to know where to look.

The artist has recently opened up ‘Evil Shop’ in Grand Central on Renshaw Street – the perfect space to display and sell his work. The shop will be having an official launch very soon, so keep checking Art in Liverpool for all the latest news.

Ben currently has a piece of work exhibited in April Ashley: Portrait of a Lady at the Museum of Liverpool, which runs until 21 September 2014.

Artist of the Week: Nathan Pendlebury