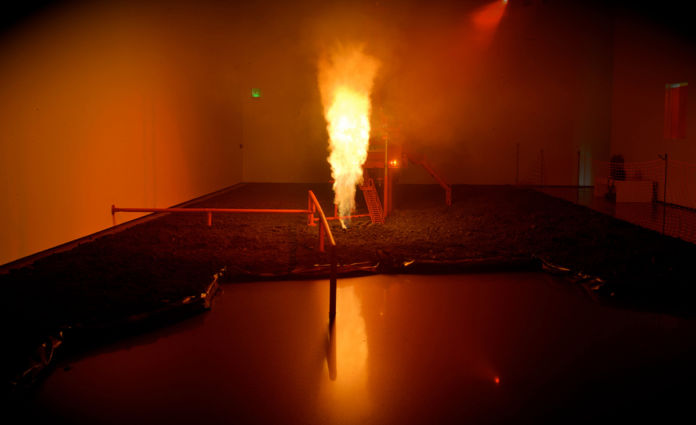 Sinead Nunes, Art in Liverpool Editor, meets curator Aneta Krzemien to talk about FACT’s current exhibition Turning FACT Inside Out, which celebrates the 10th anniversary of FACT as a gallery.

What originally attracted you to work (on this exhibition) with FACT? (Have you worked with FACT before?)

I worked on the Turning FACT Inside Out exhibition – alongside Mike Stubbs, FACT CEO – as part of a collaborative doctoral research project between the Centre for Architecture and Visual Arts (CAVA) at the University of Liverpool and FACT. CAVA and FACT secured AHRC funding for three PhD students to work across both institutions researching the role of digital media in art, culture and society and the role of FACT in the development of media art in the UK and internationally. My research looks at how has FACT presented and curated the artistic practices it was set up to promote. Working on the exhibition was – for me – also a research process; during which I took part and observed curatorial practice at FACT, finding out more about different approaches, considerations, practicalities and complexities involved in the curatorial and institutional practice.

I had also worked with FACT before this, co-curating the War Veteran Vehicle project by Krzysztof Wodiczko which was shown at the AND Festival in September 2009.

There is a lot of display space in FACT, both gallery walls and the public realm: was this a blessing or a huge task in planning the exhibition? (Thinking here about Manifest.AR and Chute)

I suppose every gallery or exhibition space presents a challenge, it has its own potential as well as limitations. FACT has great gallery spaces, very flexible and well equipped to present more experimental, technologically complex work. The amount of space wasn’t really an issue, or a challenge, as much as the complexity of work and the number of new commissions. All the works, with one exception (that is the Capitalism Works for Me piece by Steve Lambert) – were newly commissioned for this exhibition, many of them quite experimental, such as some of the ManifestAR projects, for example Biomer Skelter by Tamiko Thiel and Will Pappenheimer, which combined augmented reality technology with biosensing. Fracking Futures by HeHe and Katarzyna Krakowiak’s Chute were large, complex installations, which posed many challenges in the production stage.

It is interesting that the exhibition is so political – what makes politics so entwined with FACT’s usual topics of technology and science?

Technology and science have always had significant social and political ramifications and technological innovation has often been driven by politics, the economy or the needs of warfare. To use an example from the exhibition; the development of hydraulic fracturing technology, releasing shale gas from bedrock, all of a sudden presented this possibility to significantly alter global power structures, which are closely tied to energy resources. It is claimed that some countries that have heavily relied on fuel import, could not only become independent of foreign energy – and often related complications of difficult political alliances – but even become energy exporters. This is why fracking is so appealing to many governments. The issue of fracking is part of a larger debate, where headlines of current political economy converge including those of fuel dependency in relation to global power structures, economic crisis, and threats of environmental catastrophes. It’s a good example of how politics and technology are often intertwined.

Was politics an important element for audience participation?

We didn’t plan to make a ‘political’ show, but we tried to make a relevant show. With Turning FACT Inside Out celebrating the 10th anniversary of the building, we asked the artists what FACT, as an arts organisation, needed in order to remain relevant going forward? Artists’ duo HeHe responded by saying that it needed to remain a public space; a space for discussion where urgent issues, such as fracking, can be debated. Similarly Steve Lambert’s piece Capitalism Works for Me True/False and Nina Edge’s Ten Intentions pose questions and encourage discussion of a variety of topics. Of course, politics is deeply implicated in the idea of gallery as a valid public forum, and inextricably linked with art, that engages with social and political reality but I don’t think politics per se makes audiences participate; It’s about how artists present those issues and open up those questions, without trying to prescribe answers or predefine meaning of works; that there are perhaps many levels and contexts in which a work can be considered. Fracking Futures is not only engaging because it is ‘political’ or ‘topical’ but also because it’s open to different readings; there’s an element of humour and irony in staging fracking in a gallery on its 10th anniversary as a way of generating income. It is also a commentary on the situation of art institutions in times of austerity and funding cuts.

How do you think FACT has changed over its 10 year history?

I think FACT used to occupy a unique position, being the first purpose built gallery for presentation of new media in the UK and one of the first organisations dedicated to the incubation and promotion of new media art internationally. It managed to develop unique resources and technical expertise for supporting technologically complex work, which was significant for development of new media practices in the UK at that time. FACT’s commitment to working with communities in a collaborative way, combined with technological experimentation resulted in many interesting works and new models of working.  The context has changed. With technology becoming cheaper and more available and new media moving into the mainstream, FACT’s position has also changed from occupying its new media ‘niche’ to being part of wider contemporary art context. However, the core values of FACT, since its inception; the commitment to supporting new artistic practices and meaningful social engagement, are still very much at the heart of the organisation.

Now to ask one of the questions the exhibition itself raises: What do you think of the role of the arts venue in today’s society, and do people expect more from art galleries? Is the future digital?

It’s a really big question, and a very important one. There are many expectations on art institutions nowadays; to drive research on art and produce new knowledge, present exhibitions, build collections, provide alternative education, all of this while trying to reach wider audiences, whom the institutions are trying to engage in their activities in a meaningful and accessible way. Research, presentation, education and archiving are all very important roles of art institutions, but they are predominantly public institutions, and they need to remain relevant public spaces, places for debate – which is what artists in Turning FACT Inside Out are saying. Easier said than done, I suppose. Being relevant, alternative public arenas, where a sustained and meaningful debate can take place – is probably the biggest challenge institutions are facing. Digital media are redefining how institutions work and how we experience and engage with art; collections are now accessible online; many artworks exist both in a gallery space as well as online, so the gallery is just one point of access; the digital public sphere is an important platform for institutions to occupy and activate. Digital technologies also provide artists with many new possibilities for making and presenting work; ManifestAR don’t need the permission of art institutions and curators to show their work – their first exhibition took place at the MOMA – as an uninvited augmented reality intervention. But I don’t think the future is digital in a sense that brick and mortar spaces of art institutions will become obsolete. I think there will always be the need for those physical public spaces, where one can experience an exhibition, watch a movie, attend a lecture, take part in a conversation or simply hang out in a place where one knows there’s always something interesting on offer.

In Uncoded Collective’s Trans Europe Slow: Route 1 Liverpool in linked to other European cities – are these inter-city links important for the survival of the art gallery?

Absolutely, Trans Europe Slow was commissioned as part of Connecting Cities project, which brought together many major European cultural organisations, which together form a network, and provide infrastructure for commissioning and presenting new projects on urban media screens. Collaborations across organisations on national and international levels are very important as they enable institutions to co-commission and co-fund new projects (which they might have not been able to do on their own) share expertise, as well as provide artists with networked platforms to present their work. The gallery is becoming a node in this networked ecology of art venues, communities of practitioners and audiences. Building and supporting those networks, which is what FACT has been doing all along, is critical for the survival of the art gallery.

Were you involved with any of the commissions, and if so did you enjoy the process?

Yes, I was involved in the commissioning of the works, and yes, it was really enjoyable. Being involved in the process of making artwork, from its inception as an idea through the research and development stages to the final work in the gallery, is really fascinating. The commissioning process involved many people; the artists, curatorial, production and technical teams, everyone bringing their own expertise, skills and unique perspective, which is also what makes it such an exciting process to be a part of.  Commissions for Turning FACT Inside Out also involved cultural and community partners; The Fracking Futures piece by HeHe was commissioned in collaboration with Art Catalyst; a really interesting commissioning agency working at the crossroads of art, science and technology; some of ManifestAR projects were developed in collaboration with scientists from the School of Natural Sciences and Psychology at LJMU. TransEurope Slow, was made with the participation of members of the North Liverpool Cycle Club and was co-ordinated by FACT’s Collaborations team.

How do you feel about the controversy caused by HeHe’s Fracking Futures? Did you expect this response?

I don’t think Fracking Future is controversial in itself, as an artwork. The artists’ intention was not to take a stand, for or against fracking, but to encourage discussion and – in the context of the exhibition – point towards FACT as a place where this kind of debate can happen and where it should be encouraged and facilitated. Of course we knew that the issue of fracking is controversial, especially in the region where fracking tests were already underway, so we did expect people to have strong opinions about it. That’s why FACT invited BBC Radio Merseyside to host a debate about fracking, which was broadcasted from FACT on the opening day. 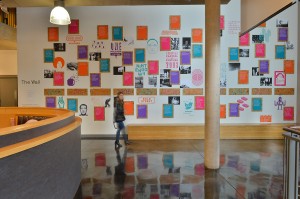 I noticed that Me_Me’s work was interested in time: was this a key theme when planning the exhibition?

Not really, the idea wasn’t to look into the past too much, to do a show that would be a showcase of the ‘best of FACT’. Rather the focus was on the future, and how does FACT, building on its legacy, continue to be a relevant place over the next 10 years. Having said that, it was important for Turning FACT Inside Out as an anniversary show to reference the 10 years of the building, hence the idea to put the call out to artists to design the timeline.

And lastly, what did you say to the robot in Nina Edge’s Ten Intentions (2013)?

I have had brief exchanges with Siri thus far, mainly during the set up period, but I have followed and contributed to the discussions on the Ten Intentions web site.

Turning FACT Inside Out continues at FACT until 15 September