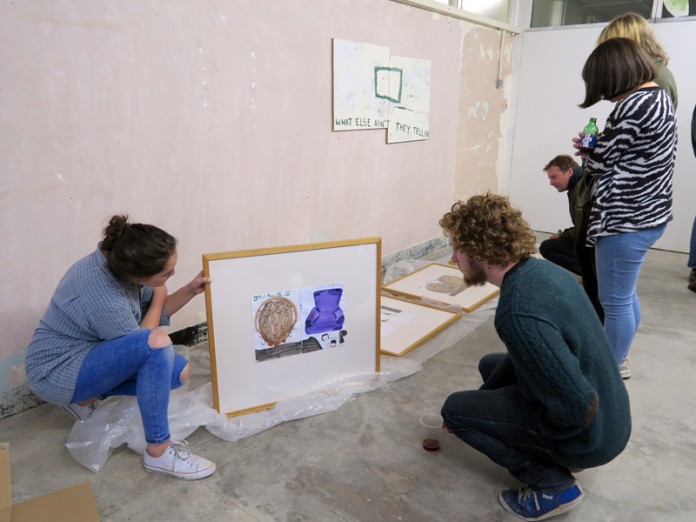 6GINS is an artist led, continually evolving, project space, running over the course of six months. It is co-founded and curated by James Worley and Lucy Bretherton.

Collaborators have license to respond to the space as it is found, as well as add, remove or alter anything they deem fit.

Initially the gallery looks quite cold and bare, it has plain concrete floor and unfinished walls but as well as the new additions on display you can find a few remnants from the 2 previous shows dotted around. Lucy and James’ energy and enthusiasm is infectious, their real affection for the artists and their works shines through adding a welcoming warmth.

For the current period GIN3 includes a piece by James Worley ‘What Else Aint They Tellin‘ an animation ‘Yukio‘ by Michelle Pang and paintings by the winner of the John Moores Painting Prize 2014, Rose Wylie.

Wylie’s paintings were supposed to be delivered by courier but they failed to turn up so James had to dash to London to collect them himself, arriving during the viewing evening. Watching the arrival, unpacking and hanging of the works added an entertaining element to the private view.

Lucy Bretherton explained that the Rose Wylie paintings are all preparatory images that she creates to inspire her larger paintings.

The actual imagery she has used include iconic scenes from films such as Pulp Fiction and Jules et Jim (which is being played on the adjacent monitor), as well as popular quotes/character names from the films too.

The works themselves have also never previously been shown, so we are really excited to be able to exhibit them.

The process of an artists work is of great interest to James, and is a core-factor of our project too.

The animation, by Michelle Pang, is of a child playing with a paper airplane. The actual seriousness of the concept took the entirety of the film to build, but with it using the exact words from the handbook of the kamikaze training, it soon becomes apparent.

The tune hummed by the child and played during the credits is an old Japanese nursery rhyme called Shabondama (Soap Bubbles) written in 1922 by Ujo Noguchi who lost his daughter when she was 7.

Children play with soap bubbles and it is fun but they soon burst and we are reminded of the brief existence of so many lives. In this case we see the story of a young man crashing his plane following the detailed instructions in the kamikaze handbook. It is a beautiful animation portraying childhood innocence intertwined with the horror of war and sorrow that bereaved parents must feel.

The number of collaborators grows with each GIN and the next viewing on 23 October promises to be a cracker.

Joel Bird at The Reader Gallery

RESOURCE at Bluecoat now on