Ahead of this year’s LightNight, we’re trying to get to grips with Richie Moment, a self-professed art world icon, who should be taking Frieze by storm and mounting the next charge on the future of the art world, if past articles are to be believed.

There’s something hiding behind those claims though; a discomfort at how the art world functions, and the language within it. Perhaps we need more artists shouting down the problems, perhaps we don’t.

Either way, ahead of what will undoubtedly be LightNight’s most memorable work of 2019, we put it to him, and these were his answers:

In 2017 you were in the process of creating the most powerful video in the world. How did that go?

St George’s Hall’s a pretty big platform. You’re against the word position, but it’s pretty up there for Liverpool. How does that fit with the momentum of self-promotion and surreal self-portraits in your films?

RM: The films are about taking care of problems; they are as much self-help for day-to-day anxieties as they are about highlighting larger global issues. With these problems being taken care of it means my hands are free to make the sculptural work. The best and most important thing about installing them at St Georges Hall, is the massively broad audience that get to engage with the work. As open culture so rightly put it ‘Art for everybody’.

There’s a not-so-tepid anxiety in your work – It’s mentioned in other posts around the internet too – which creates a sense of ire. You know, slightly irritated by the world you’re in, and wondering how to stand out. Where did that come from? The anxiety about the art world?

RM: It’s anxiety from external pressures. There is an unescapable pressure to have an online presence and to fit in, whilst still being interesting. I just got to the point where I thought, if you are going to force me to have an internet presence, I’m going to make you wish you didn’t. If you make anything from scratch it’s a very personal thing, so why shouldn’t your online presence be representative of that. By working this way it helps you realise, that even with all of these external pressures, ultimately the biggest pressure comes from yourself. But luckily that’s the one you can stop the easiest once you realise it’s there, leaving you free to smash it.

The work coming to Liverpool in May is a re-run of something you installed at the Cheriton Light Festival last year – is it changing, or reaching for the new platform at all – or is it another confident, defiant presentation of your work as it was?

RM: It is a new platform. It’s very important to me that the work is always culturally site-specific and not just in relation to the architecture of the building. The new work will sit on top of the stone plinths that already exist outside St Georges Hall and will be my biggest (and best) to date. All of the imagery in the sculptures are hand cut into the wood with an industrial router, like you would use when fitting you kitchen work top. The only laser that is used in the process, is the one to get rid of my crow’s feet at the Swiss clinic.

RM: Pop culture is the language that everybody already speaks. That language can be used to ask important, bigger questions. It’s not just about bringing high culture down, or what is seen as low culture up. It’s about letting them exist in the same space. Modern life is great, but that doesn’t mean that we shouldn’t stop every now and again to take stock. What better place to take stock and show some of the best work in the world, then at a big night out in one the best cities in the world. 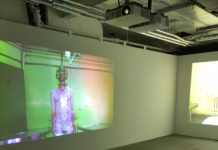 Artist of the Week: Through Our Eyes Films