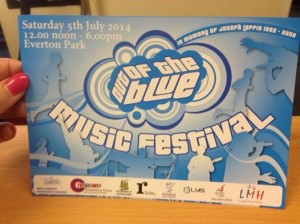 5 July 2014
12.00 – 18.00
Free
Join us at this fantastic festival happening in Everton and support true Liverpool culture.
The event opens up with West Everton Children’s Orchestra Inharmony, with 3 performances from different sections of the orchestra. Other bands and performers include The Peace Makers, The Waltones, Joe Symes and the Loving Kind, Ogo Nzeakoa, Rosie and the Joe Maddocks band.
This is the sixth Out of the Blue music festival in less than five years since it was resurrected in 2009. The original festival was first created in 1991 in the fountains area at the rear of Great Homer Street market located in Everton Park. Out of the Blue is now arguably the oldest music festival in the city of Liverpool, an outdoor urban cultural music event with the commitment to help showcase local musical talent and national talent with unsigned bands from the citys of London and the midlands who  performed in the early nineties.
Out of the Blue is a community led project event born out of West Everton community centre on Everton brow. The event is made possible by dedicated volunteers , who organise the process of the festival.The event is in memory of teenager Joseph Lappin who was tragically killed in 2008 near Everton Park whilst attending the local youth club, visiting friends’ band practice.
Music, food, games for the kids and a lot of very nice people. Organised  on by community groups from Liverpool for the people of Liverpool.

STARTS – Embroidery in the Park