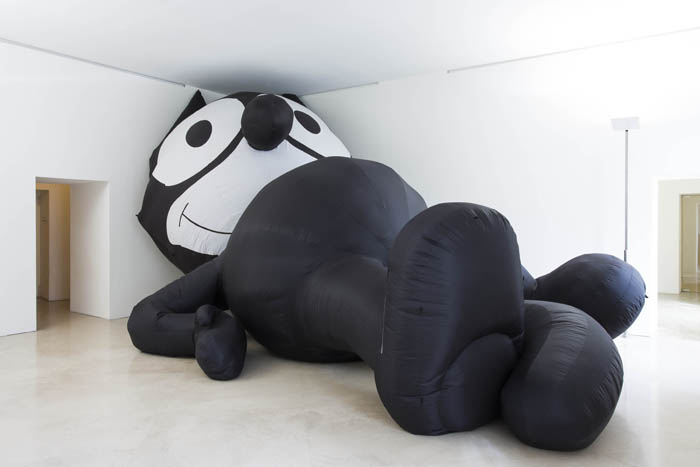 Inside the dome, two screens play a looped film which shows Mark Leckey ‘transforming into Felix’, inspired by a photograph of a Disneyland cast-member in a Mickey Mouse costume. The shape of the dome acts as a giant speaker, amplifying the sound of the film to create an immersive experience.

On his interest in Felix the Cat, Mark Leckey said: “I liked that it was a two dimensional cartoon that became a three dimensional doll, that then became this electronic entity that got broadcast out into the ether. For me, Felix symbolises the way in which technology blends the real and virtual worlds.”

Leckey cites a performance lecture that he gave at the Institute of Contemporary Arts (ICA) in London, titled ‘In the Long Tail’, as the starting point for his fascination with Felix. His lecture drew on an image he’d found on the internet of the cartoon feline, from which he discovered its origins as the first broadcast image.

Mark Leckey was born in 1964 in Birkenhead, and lives in London. He won the Turner Prize in 2008. His artwork includes sculpture, sound, video and performance. He is fascinated by the power of images, music, objects and technology.