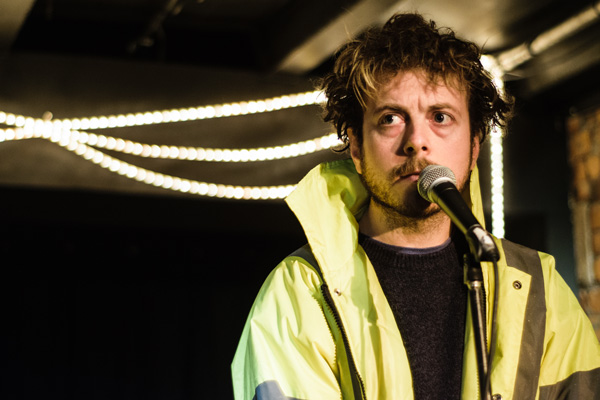 A night-out with a difference is coming to Liverpool….
On the back of a successful 22-night run at Edinburgh Fringe festival TOP JOE launches his Regular Gig.

Top Joe’s Regular Gig is a monthly residency for the eccentric Welshman where he will be joined by hand-picked comedians and musical acts.

The first of Top Joe’s Regular Gigs will take place at Liverpool’s newest art and performance venue The Well Space on Saturday 17th October. There he will be joined by highly-rated comedian LIAM PICKFORD and underground pop polymath ESA SHIELDS.

Top Joe is an elusive high-vis wearing Welshman who only comes out at night. His previous shows have explored life, Buddhism and 80s power balladry.

Top Joe warns that this is not the typical comedy night: “People should not expect Donal McIntyre’s Comedy Roadshow. This is the comedy of life, yes, but it is not about losing your keys or what you had for your tea 10 years ago.”

Chortle’s 2nd place winner in this year’s Student Comedian of the Year Liam Pickford is developing a sterling reputation for himself amongst comedy fans across the country with his collision of high-brow references with the minutiae of daily life.

After coming of age in the golden age of the Korova club and quietly building a magical world of 60s-infused leftfied pop, Esa Shields has developed a reputation as an
enigmatic underground innovator. He will have a chat with Top Joe before performing a set.

Admission is £4 on the door with cheaper tickets available here. For more information go to: www.topjoe.co.uk

Liam Pickford
Probably the least appropriate person to currently be studying a primary PGCE (but he is) Liam Pickford is destined for big things with his brand of end-of-the-pier comedy and a drunken poet’s use of timing and vocabulary.
Chortle Runner-Up Winner Student Comedian of the Year 2015 Manchester heat of BBC Radio’s New Comedy Award in 2012
https://www.youtube.com/watch?v=93HFi4Za9r8

Esa Shields
GIT Award 2015 nominee Esa Shields is a difficult artist to pigeon hole. The pop auteur has appeared in various well-respected bands who have graced the Liverpool music
seen over the last decade or so before settling on his own sound which is entirely unique. The sound, whimsical psychedelic and cinematic, will work a treat in the otherworldly surrounds of Top Joe’s Regular Gig.
https://soundcloud.com/esa-shields