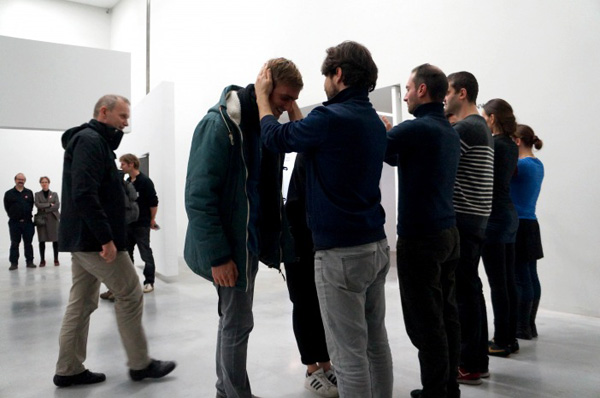 It’s 2053. All of the artworks in Tate Liverpool’s special exhibition An Imagined Museum have vanished, replaced by a ‘living museum’ an army of people assembled to preserve the memory of the artworks that were once on display.

2053: A Living Museum is the extraordinary conclusion of Tate Liverpool’s special exhibition, An Imagined Museum: works from the Centre Pompidou, Tate and MMK collections.

Visitors can expect to see a wide variety of performances including dance, song and spoken word.

An Imagined Museum and 2053: A Living Museum draw on Ray Bradbury’s book, Fahrenheit 451 (1953), where characters become a living library of banned books to preserve their content for future generations.
Starting at 10.00 on Saturday 20 February 2016 each of the artworks that were in An Imagined Museum will be ‘remembered’ one at a time. Each performance will express the unique impact and values that only art brings into our lives.

Performance
Alexandra Pirici and Manuel Pelmuş
Saturday 20 and Sunday 21 February, 10.00 – 17.00
Acclaimed artists Alexandra Pirici and Manuel Pelmuş will present a new work entitled Ongoing Perishable Objects. The work addresses the role of the public museum as an institution which collects, historicises and displays cultural artefacts, the artists’ ongoing live action harnessing the expressive and discursive potential of the body to re-enact a sequence of ten works by artists including Andy Warhol and Louise Bourgeois from An Imagined Museum. Their live work rethinks the relationship between spectator and artwork, initiating a dialogue positioning the body as a carrier of cultural and social information while asking us to consider the methods by which museums preserve and value art.

In The Frame
Saturday 20 February, from 14.30
Working together with artist educator, Jon Barraclough, In The Frame have created a sound piece that reflects The Fall’s energy and tension.

Along with a host of curators, art historians, artists, students, community groups and members of the public still to be confirmed.

Would you like to perform at Tate Liverpool?
Members of the public are invited to help us remember the artworks on display in An Imagined Museum. Join our ‘living museum’ and register your interest in participating. Email alivingmuseum@tate.org.uk or sign up in the gallery. Selected applicants will then work closely with Tate Liverpool curators and artists at workshops to discuss and learn an artwork by heart so it can be re-enacted publicly during the event.

Supported by the Creative Europe programme of the European Union, Institut Français du Royaume Uni, the German Federal Foreign Office, Goethe-Institut London and the Romanian Cultural Institute in London
This event is related to the exhibition Works to Know by Heart: An Imagined Museum