Home The Serving Library: Biennial Fringe 2016: You are *here*

The Serving Library: Biennial Fringe 2016: You are *here* 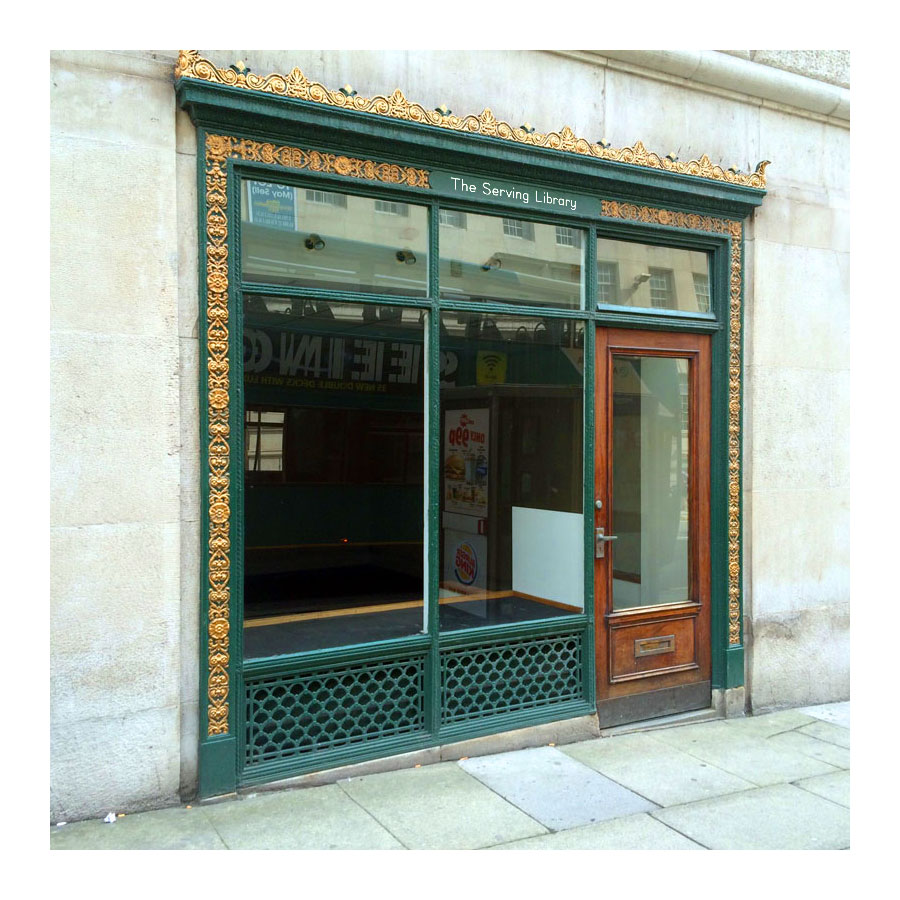 The Serving Library: Biennial Fringe 2016: You are *here*

, standing in the middle of a small storefront in the city’s once colorful mercantile district, formerly a vital hub for the international commerce of goods and information. Lately, it hosts a mix of retail and professional spaces, many of them empty. There’s a news agent, a couple of cafes, an electrician’s shop, and a new bar over the road. Though the India Buildings cover a full city block, you stand in one modest space, behind a glass facade facing Water Street. The concrete floor (until recently covered in commercial carpet) is now exposed and showing its age. Drop ceilings have been removed, and the walls have been dressed in a new coat of bright white latex, as well as a mixed collection of framed artefacts hung floor to ceiling. The objects — approximately 80 — are of many sizes, in many different frames. The logic of their arrangement is suggestive, but elusive.

Though there is the odd album jacket or offset poster, these things are mostly one-of-a-kind originals. You notice a small oil and watercolor hung just to your left, depicting two shoes poised on tiptoes, further balanced on a rather insubstantial pedestal — a painting by Sanya Kantarovsky called Untitled (Librarian) from 2011. Across the way, at a markedly distinct scale is a huge red wax crayon rubbing of a “Monument to Cooperation.” Next to that is a photograph (about 8 x 10 inches) of a performance of “Bauhaus Yoga” by Paulina Olowska from 2001. Another one, stuck out from wall, hanging like a flag-mounted sign, is in fact a sign: chrome finished, and consisting of ten capital letters joined to one another to spell out the question-statement, “WHERE WERE WE.” An image of this sign appeared first on the cover of a bulletin of the same name, there printed in silhouette, a crude shadow of itself. Other objects include lithographs, record covers, faxes, acid blotter artwork, and a ouija board.

At some point, every one of these items appeared, scanned or photographed, as an illustration in an issue of the house journal attached to this space, BULLETINS OF THE SERVING LIBRARY, or its precursor publication, Dot Dot Dot. Typically, the images accompanied or triggered a piece of writing. Each of the images (selected and reproduced in service of the author’s argument) was then an excuse to source the original object. Sometimes these were simple enough to find (say, a record sleeve (thank you, eBay)), but often they were not (recently, a two-sided Berlin Key was lost in transit by Deutsche Post).

However these anecdotally-loaded objects eventually arrive at the library, they come with significant backstories attached. The stories add up, like the objects on the wall, into a reverse-assembled archive. And thus a collection, a library of a sort, comes into existence through the act of publishing. This publishing-archiving economy is a mobius strip — releasing multiple printed and pdf images into the world and (then) importing the originals back to this library.

The front door just behind you leads back out the way you came in. You’d have arrived at the Lime Street station, where trains from London arrive every hour. Or perhaps you walked here. But you aren’t ready to leave just yet, as you notice a discreet staircase headed to a basement. There’s a light on, and a distinctive smell emanating from below. You suspect whisky is being served at this library.

The Serving Library at 35 Water Street is NOW OPEN and will remain so during the summer run of Liverpool Biennial 2016 (9 July – 30 October) at irregular hours to be announced, and by appointment (phone 07957 738578). Once or twice a month it will also host evening events relating directly to the Bulletins — talks, films, seminars, and the like. And later in the year it will offer the first in a seasonal series of extended workshops organized in collaboration with specific arts schools but freely open to members of the public.

Please join us on SUNDAY 10TH JULY 2016 from 6pm onwards for an extended introduction to the space and to celebrate the launch of BULLETINS OF THE SERVING LIBRARY #11 which is both printed in and concerned with color.