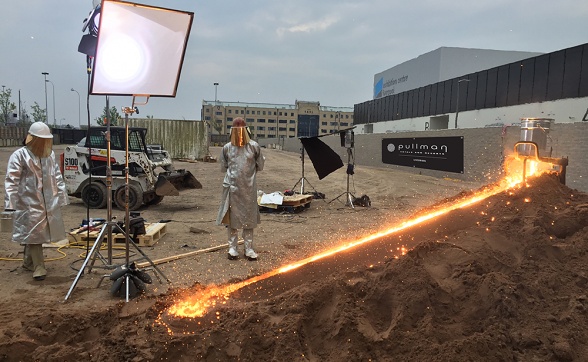 In May 2016, Raphael Hefti created a new site-specific commission for the newly opened Pullman Liverpool hotel. For a week, the artist transformed part of Kings Dock into a studio and film set, which also functioned as a stage for a live performance.

A huge pile of sand worked as a makeshift foundry, and with a technique usually used to repair high-speed railway lines, Hefti made a  new performance, film and sculpture. The welding process melts steel very quickly: lava-like flows of molten metal poured down the sand, finding final form as the material cooled down.

Hefti references heavy labour and iron casting, the backbone of contemporary infrastructure: processes that have long histories but that usually remain hidden. The film is shown at the end of each film programme screening. For further screenings, check www.biennial.com.

Commissioned by Liverpool Biennial and AccorHotels.