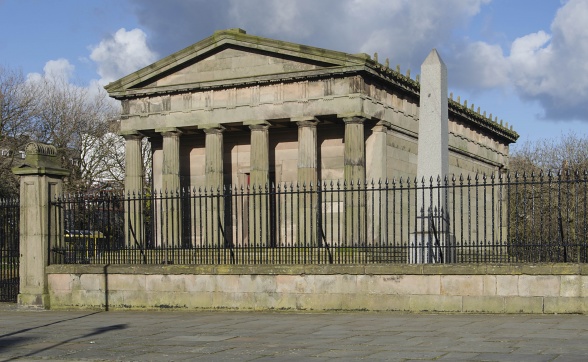 Hamdan is a forensic audio analyst as well as an artist, and in 2014 he was asked to analyse audio files that recorded the shots that killed Nadeem Nawara and Mohamed Abu Daher in the West Bank of Palestine.

His audio investigation, which proved that the boys were shot by real bullets and not rubber ones, is the starting point for Rubber Coated Steel – a work about aesthetics, politics and the potential violence inherent in both noise and silence.

The Oratory includes one of Rita McBride’s Perfile series, Lara Favaretto’s Lost and Found, and Jason Dodge’s What the Living Do. It is also the place where visitors are invited to participate in another project happening nearby.

The Oratory was built in 1829, and its architect was John Foster, one of the Greek Revivalists who shaped Liverpool’s neoclassical cityscape. It contains a number of neoclassical sculptures, three of which are by John Gibson (1790–1866). Brought up in Liverpool, Gibson sought to emulate the style of the classical world in his own work. The Oratory is part of National Museums Liverpool.