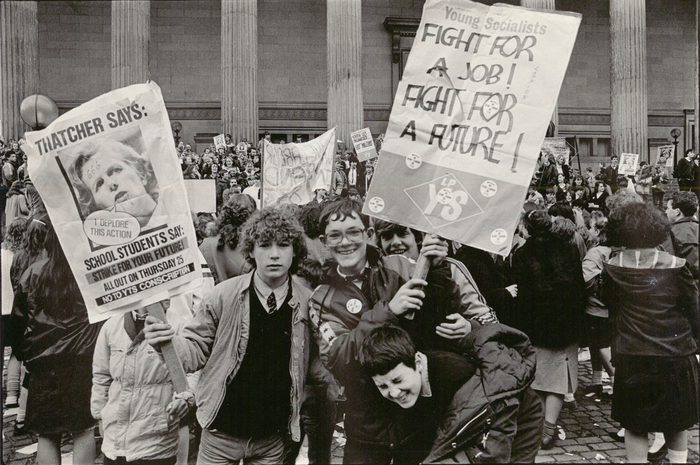 Liverpool Biennial 2016 is organised as a story narrated in several episodes: Ancient Greece, Chinatown, Children, Monuments from the Future, Software and Flashback.

The Flashback episode presents a way of experiencing history as it punctures the present, unexpectedly. The Children’s episode invites artists to consider children as the primary audience, making work with and for them.

Koki Tanaka’s diverse art practice spans video, photography, site-specific installation, and interventional projects. For Open Eye Gallery, Koki Tanaka revisits the scene of a huge protest in Liverpool (1985) that involved around 10,000 children, all of whom were angered by the Conservative government’s Youth Training Scheme (YTS).

Fabien Giraud and Raphaël Siboni’s collaborative work reflects on cinema history, philosophy and technological evolution. La Vallée Von Uexküll is the third in a series of films that respond to a strict protocol. In this film the sunset is filmed with a video camera but without any lens. Every time progress is made in image resolution and a new camera brought to the market, the film is shot once again. The artists will finish this film series once the resolution of the image surpasses the capacity of human perception – when the ‘eye’ of the camera can see more than the human ‘eye’.

Three submersibles, Anti-Catty, Princess Rambo and Space-Sheep, have smuggled artwork from Dubai to Liverpool. By circumnavigating the normal procedures used to transport artworks from one place to another, they deliberately degrade the usual values assigned to art objects. In the gallery, and across other venues, are videos by Ramin Haerizadeh, Rokni Haerizadeh and Hesam Rahmanian that document the daily lives of the submersibles, the smuggling and objects that have emerged from this process.