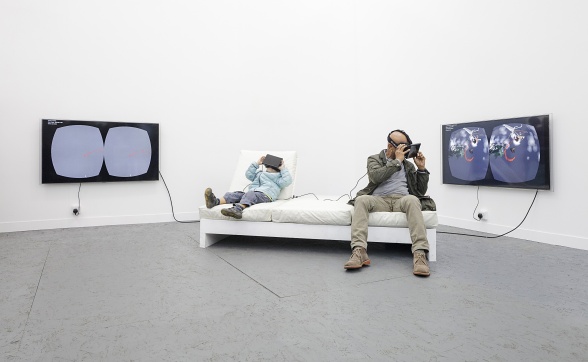 The computer game Minecraft allows its users to invent their own world from simple block components, and to interact with the various spheres Minecraft constitutes – the hell-like Nether, for instance, which can only be entered through a smoke-filled portal. Minecraft Infinity Project works with Minecrafters the world over to create a ‘portrait’ of Liverpool Biennial, in which users render their own version of the exhibition. It incorporates a number of artworks by participating artists.

Oliver Laric’s 3-D scans of sculptures from Liverpool’s Walker Art Gallery include work by John Gibson (1790–1866), who actively oversaw reproductions of his work in the form of statuettes, cameos and prints. 3-D prints of these scans exist across the Biennial, and data from the scans can be accessed, free, at www.threedscans.com.

Lawrence Abu Hamdan’s HummingbirdClock is located physically outside the law courts in Derby Square, and online at www.hummingbirdclock.info. It is designed as a tool for investigations into civil and human rights violations. The clock records the second by second variations of the buzz made by the electrical grid. The sound files are made available online, so that the public can analyse the date and time of any recording made within earshot of the grid, in case they need to know whether the recording has been tampered with.

An audio work by Marcos Lutyens incorporating myths, rumours and portals can be downloaded and listened to whilst walking around the city, or sitting near the Chinatown arch.