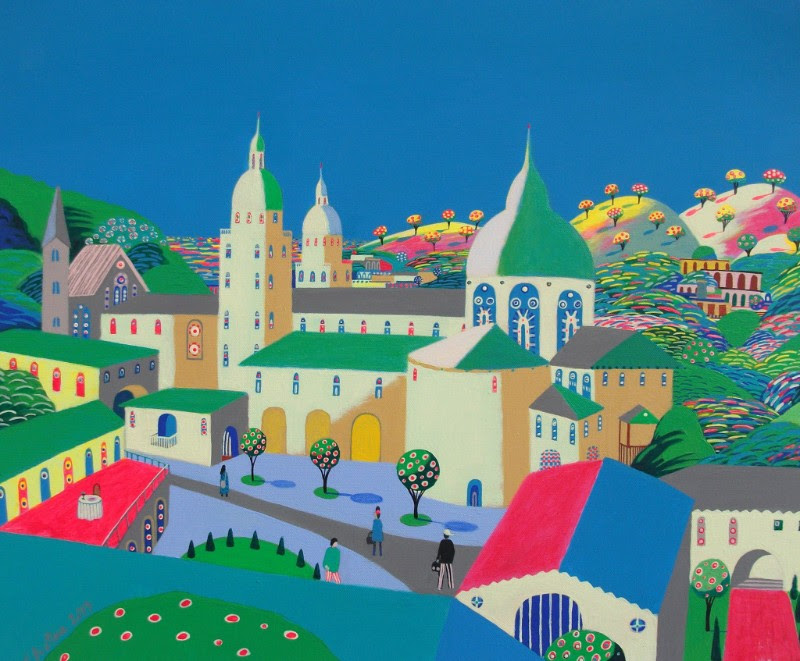 Glimpse Of Sunshine – By Katrina Avotina

Katrina has been painting professionally for over 20 years. Currently based in Leeds City, she works mainly with acrylic colours.
“It was natural for me to become an artist. Colours, brushes and canvases were always around my home since early childhood, as my family have been artists for generations.

I have been participating in exhibitions since I was sixteen and won several awards, the most important being the opportunity to spend some time in Vienna City. It was here that I discovered the inspirational F. Hundertwasser’s art. Other artists that inspire me include Henri Matisse, Claude Monet, Gustav Klimt and Pablo Picasso.

I began my education at Art College, and continued my studies in a Bachelor of Fine Arts in Painting, followed by a Master’s Degree at the Art Academy of Latvia.

I have taken part in solo and group exhibitions since 1993, with my paintings being held in private collections throughout the world including Ireland, the UK, Japan, Australia, New Zealand and the USA.

For the last twelve years, I have been living in Leeds. The beautiful Yorkshire scenery widens my creativity. Here I find the different forms of nature, make it feel like Italy, France, Spain and Latvia all in one.

In my paintings, I devote much attention to the play of colours, line and plot. I convey my vision of the world with colours and images, but the plot plays a special role.

The paintings were created mainly during my travels. I try to perceive the world not only in my native Latvia, but also in other countries. Each painting has its own story. Some tell about the scenic mountains of Tuscany, the magic cathedrals of Italy. Others perhaps, are stories about Britain’s magical gardens, a cat that brings warmth and peace to a home or a woman waiting for the love of her life.

In the last couple of years, I have been included in several art shows. I was part of the Digital Art Exhibition “Story of The Creative” and also the “See.me” Arts Organisation’s show in Times Square, New York City, where three of my paintings were on display.

I held a successful solo exhibition at the “Shine Arts” Business & Conference Venue in Leeds and solo exhibition “Dream or Reality” at Art Gallery “Istaba” – An exhibition devoted to Riga City as the 2014 European Capital of Culture.

Two of my paintings “Moment in Yorkshire” & “Message To Beloved” have been sold at the Charity Auction “Liktendarzs” – Riga City, Latvia.

My artworks been published in several magazines such as ROCO Magazine & AESTHETICA Magazine in UK.

Recently, I did Illustrations for two children books” Fly, who wanted to be an airplane.” & “Kad aizmūk B un iemīlas Z. 10 patiesi stāsti” by Ieva Samauska.

I wish to spread beauty in the world and to bring happiness to people through my paintings. I hope that all those who view my works feel the love I portray.”