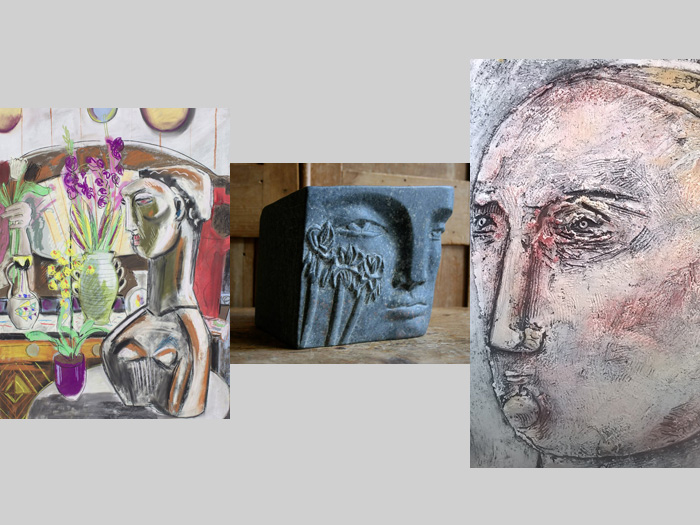 In our new generation of social networking, a mutual appreciation developed through Twitter, between Pauline Hughes, Jo Sweeting and Naomi Munuo when they became followers and supporters of each other’s work.

In May 2015 Pauline tweeted ‘We should think of having a show together.’ A month later, they met in person for the first time at Sonia Delaunay’s exhibition at the Tate Modern.

The group quickly found a common interest for early twentieth century art and primitive sculpture. A shared ambition to celebrate the figure made solid united the group and they found excitement in the contrasting elements of each others work.

It was decided three group shows should occur in the respective home towns of Liverpool, Brighton and Ipswich . They left London on that spring morning as #Threeform.

Jo Sweeting’s work is based on the concept of ‘Shul’, a marking which remains after the thing that made it has passes. A dry riverbed or hollow an animal made in the grass are ‘shul’. Her interest is in how these traces are left on our bodies and memories. She uses words, or a figure or plant as a starting point and focuses on growth and change. She celebrates a moment in time. Starting points can be poetry, an overheard conversation or the landscape. Stone is her preferred medium because unlike many other materials its starting and finished state remains constant.

Naomi Munuo’s work is the result of an artistic career that has spanned over two and a half decades. In the late 80’s she studied fashion at St Martin’s College. It was there that sheI confirmed an interest in the human form using richly textured, irregular shaped surfaces. Her work is autobiographical and uses colourful images and objects set in abstracted patterned environments, combined with expressive superimposed detail. Sculpture and colourful expressive painting has been a fascination and features within her figurative compositions, with angular lines providing structure. Observation, colour, layering, mark making and form are an important part of her process.

The human figure and, more recently the head have always been central to the work of Pauline Hughes. Her fascination with this subject stemmed from a childhood love of Egyptian sculpture that then inspired her to create her own figures . In school she began to work with clay and this became inextricably linked with the figure and so the foundations were set for her lifetimes work. “As I move into my 50th year my desire to work with the figure is stronger than ever. My work is simply about making pieces that I care deeply about and that take on a life of their own after I have finally lifted my hands off them. What more can I ask of myself and of my work than that ?.”