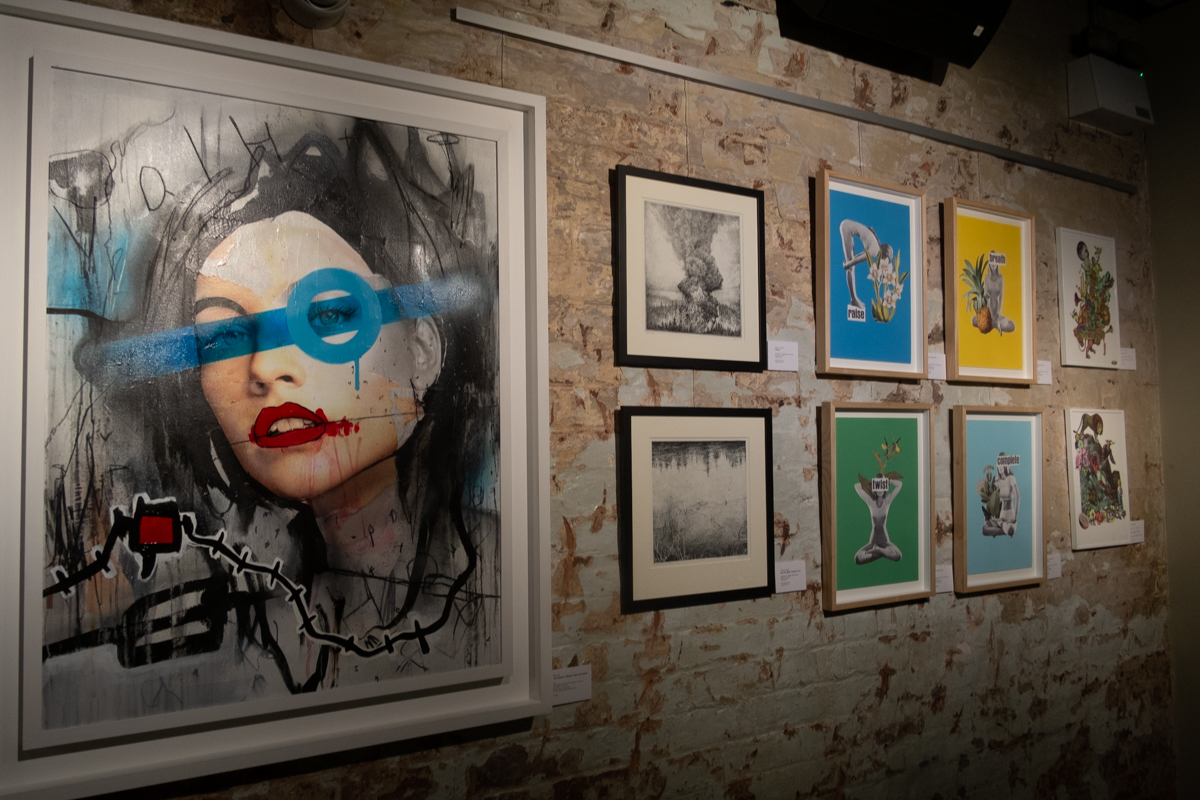 RedHouse Originals are delighted to announce that their exhibition at Liverpool’s Buyers Club on Hardman Street will now run until Wednesday 27th February, 2019.

RedHouse Originals Gallery offers original artwork and limited edition prints by a host of international artists. They work with established and emerging artists to bring you the finest in Modern and Contemporary art.

Buyers Club Gallery is a monthly curated exhibition space for both established and up and coming artists in the city. The bare brick wall has been graced with large scale photographs, detailed illustration, multiple layered screen prints and floral painted original canvas’s since programming began in Feb 2018.

Artists in the exhibition include:

Raised in Liverpool and New York, Candie Payne is a self-taught Illustrator whose highly detailed drawings are at once bold and delicate, simple and full of intricacy.

Working predominantly in pencil, pen and ink with occasional flashes of colour, Candie’s work is informed by her love of fairytales, ballet and circus performers. She creates characters with compelling and surreal twists that tell their own story.

Born in Yorkshire, in 1979, Schoph Schofield is an artist in a continuous state of creation.

Known as ‘Schoph’, the artist’s dynamic and brooding paintings are at once beautiful and dark. An uncompromising and bold execution capture an energy and depth, delighting his loyal following of collectors and admirers from the sun-drenched beaches of Santa Monica to the snow-tipped mountains of Tignes.

The Coral are one of the UK’s most celebrated guitar bands. They released their first album in 2002, and since their debut EP have sold over a million UK albums. With five top ten albums, including the chart-topping Magic and Medicine (2003) and eight top 40 singles within their repertoire, James Skelly (vocals/guitar), Ian Skelly (drums/percussion/vocals), Nick Power (keyboard/vocals), Paul Duffy (Bass/keyboards/vocals) and Paul Molloy (guitars), stride into the future to fortify their indefinable position in modern music.

Prior to becoming a full time artist, Larsen had an extensive career as a professional snowboarder, travelling and performing worldwide whilst creating digital content for the industry. He has worked on numerous collaborations with renowned brands including Etnies, Spy Optic, K2, and a recent a signature clothing collection for the Norwegian metal band, Satyricon.

Thomas James Butler was born in Harrogate in 1982. Growing up with weekly trips to galleries and watching his father paint and sculpt, Thomas fast became deeply interested if not obsessed with Art.

After a brief and disillusioned spell at Art College he travelled and worked, eventually settling in the world of horticulture. Butler has spent the last ten years working in garden design, whilst quietly spending his spare time creating his own style of collage and painting. Only now has he decided to make them public.

Born in Wigan in 1966, Brian Cannon is a graphic designer, photographer and art director. He studied Graphic Design at Leeds Polytechnic and founded the legendary Microdot design company in 1990.

Cannon has worked extensively in the music industry and created iconic album covers for some of the most successful and celebrated albums of recent generations. He is closely associated with Oasis and produced the artwork for the band’s first three albums and singles including Definitely Maybe, (What’s The Story) Morning Glory? and Be Here Now. He also worked with The Verve and Super Furry Animals, following the lineage of Sir Peter Blake, Storm Thorgeson and Peter Saville, elevating the record sleeve to an art form.

Born in 1979 in Hertfordshire, Gareth Halliday studied Fine Art at Northampton University, graduating in 2000. Soon after completing his degree, Halliday became disillusioned with the commercial art world and took a sabbatical of several years. It wasn’t until 2009 when the artist turned his attention back to image making.

Having collected printed ephemera for over two decades, the artist is drawn to the otherworldly qualities of vintage photography and collage. Halliday utilises found images and a Dadaist and Surrealist sensibility to form worlds simultaneously possible and impossible. He contrasts the sublime with the terranean, altering perceived reality and creating his own unearthly dreamscapes.

Born in Leeds in 1979, David Rusbatch’s work draws on universal themes, filtered through a contemporary sensibility.

In 2008, Rusbatch became one of the youngest exhibitors at the National Design Museum. This was followed shortly after by his work being shown in the 2009 Venice Biennale, which in turn garnered critical and commercial acclaim.

Born in Charleston, South Carolina, Shepard Fairey is a polarizing figure in the world of street art. His major works have made as much of an impact as the works of Space Invader and Banksy, although Fairey does not hide his face or change his voice when appearing on camera.

His art is distinctly political, and Fairey frequently supports social causes and opposes corporate influence. He also profits off his most popular anti-corporate pieces, which angers some of his contemporaries.

Not many venues can flit so effortlessly between wine bar, cocktail parlour, small plates restaurant and gig space, but here at Buyers Club, we think we do a pretty good job. Situated just off the beaten track of Liverpool’s burgeoning Hardman Street, Buyers Club plays host to regular garden parties, live music, BBQs and art exhibitions.

Serving up passion without pretence, we’re a small, tight-knit team with a big thing for cocktails, craft beer, and all things vinyl. With a leaning towards natural, low-intervention and biodynamic wines, we also strive to show you just what the humble grape has to offer. Embracing a laid-back but well-informed approach to everything we do, we work hard to maintain a convivial vibe for the bon vivants of Liverpool and beyond.

RedHouse Originals Gallery, based in Harrogate, offers original artwork and limited edition prints by a host of international artists. They work with established and emerging artists to bring you the finest in Modern and Contemporary art.