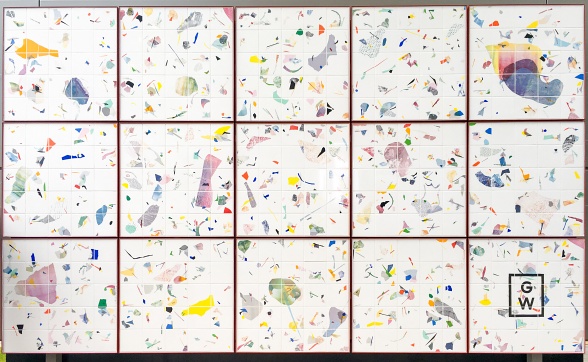 Since 2012, Assemble have been working with local residents and others in the Granby Four Streets area of Toxteth, Liverpool.

The houses that constitute the Four Streets were built around 1900. Granby Street was once a lively high street at the centre of Liverpool’s most racially and ethnically diverse community. After the Toxteth Riots in 1981, many of the houses were purchased by the Council and earmarked for redevelopment. As a result, hundreds of people were forced to move out of their homes. Over the past 10 years, residents who resisted these plans have tenaciously fought to save the area from demolition, reversing dereliction through domestic acts of care and creativity.

In 2015, Assemble won the Turner Prize for their ongoing collaboration with the Four Streets residents. They used this opportunity to launch Granby Workshop, a social enterprise that makes handmade products for homes, all of which are made in Granby by local people.

A sign built on the occasion of the International Festival for Business 2016 introduces the ethos of the Workshop, presenting the project back to its home city in a public context, and exploring the relationship between creative action, production and regeneration. The sign is located on the permanent premises of the Workshop and forms part of the building’s refurbishment.

Commissioned by Liverpool Biennial as part of the International Festival for Business 2016 (IFB2016).