DUAL EXHIBITION IN KAUNAS: A DIALOGUE OF TWO ARTISTS. TECHNO-ILLUSION

OPEN CALL TO PARTICIPATE IN THE DUAL EXHIBITION “EVENT HORIZON/ EXPERIENCES ON TIME AND SPACE” IN WHICH ARTISTS FROM VALLADOLID AND THE REST OF CreArt CITIES  CAN APPLY.

“Event horizon / experiences on Time and Space” will be presented in the Sala 0 of the Museo Patio Herreriano of Valladolid (Spain) from October 31 to December 15, 2019.

1 PURPOSE OF THE OPEN CALL

The European project CreArt (Network of Cities for Artistic Creation), through the Municipal Culture Foundation of the Valladolid City Council, opens a new call to invite both artists from Valladolid and the rest of the cities that are part of the CreArt project ( Artists must be born or residing in Valladolid – ES, Genoa and Lecce – IT, Liverpool – UK, Clermont – Ferrand and Rouen FR, Zagreb – HR (member of HDLU), Kaunas – LT, Lublin and Katowice – PL, Aveiro – PT; Skopje – MK) to participate in the Dual Exhibition “Event horizon / experiences on Time and Space” that will be presented in Sala 0 of the Museo Patio Herreriano on October 31, 2019.

The organization will cover:

– the production expenses of the works of the selected artists.

– the installation, transport and insurance costs of the works.

– the costs of dissemination and publicity of the exhibition, including a catalogue.

– travel, accommodation and subsistence costs for the artist of the selected CreArt network, on the occasion of the installation and opening of the exhibition (maximum 3 days).

The following attached documentation is required in a single PDF document:

• ID or passport (scanned copy) and/or any kind of document that proofs your connection to your CreArt home city;

• A short version of your curriculum vitae (maximum one A4 sheet)

• A brief written project proposal (maximum one A4 sheet)

• Graphic documentation related to the proposal and possible works that could be included in the exhibition.

Only applications with complete information will be accepted before July 14, 2019.

The curator will examine each of the proposals presented, studying the quality, the feasibility of the same, and their adaptation to the concept of the exhibition and the room where it is presented.

The curator, with the collaboration of CreArt, will choose two artists, one from the city of Valladolid, and another from another city of the CreArt Network.

CreArt Valladolid will inform all participants by email, after July 22, and the names of the two selected artists will be published on the project website.

The participation in this call implies the acceptance of these bases and the selected artists must include in their CV and in all future communications (press, digital media) that have been selected to participate in the Dual Exhibition in Valladolid. CreArt. Network of Cities for Artistic Creation, a project co-financed by the European Union. This commitment will be sent by written and signed.

“… Space was closed, the only possible link with survival is Time …”

With this devastating phrase a dispassionate mad scientist explains to the main character of the enigmatic film by Chris Marker “La Jetée”,  that only by penetrating the dark concentric circles of time, humanity could be saved from its fatal self-inflicted destiny. It was 1962, and the dreams to release modern man (and cinema) were still fresh but in shock after the American nuclear waste. The atomic cold war threatened to “close” the space between asphyxiating iron curtains, and it only had left to move forward in time, being suspicious of the scientific advances, seen as a dead-end street, and trusting blindly in the liberating and emancipating power of the image and art, already linked forever to political activism in one way or another.

The power of the current image and its incontestable kingdom is now perfectly aligned with the political power of the new world order, and it seems that the only hope for this humanity is through the overflowing expansion of our knowledge horizon and our capacity to interpret this incessant flow of “big data” giving it a comprehensible form, a re-scaled more manageable, that sublimates quantity in quality, words in meaning.

One of the areas that have evolved the most since then, is that of particle physics (the infinitely “micro”) and that of astrophysics (the infinitely “macro”) where an “event horizon” is defined as any place in space-time from which it is impossible to collect testimony of reality, marking an invisible border between the knowable and the unknown. It is a “hypersurface” that belongs neither to the past nor to the future that separates two worlds of observers impossible to alternate, as sometimes seems to happen between author and observer of a work of art. We do not know in which state its internal matter is, no matter how close we get.

Perhaps, precisely that has always been the mission of art: to expand and subvert that boundary between reality and its representation, between dark space and illuminated time, but through poetic language, immeasurable and distant from physics and its certainties: telling the history of what Schrödinger’s cat thinks and feels inside the box, rather than ensuring if he lives or not.

Science and art have never been so distant in the background, and both forms of knowledge, rational and irrational, are compatible and pertinent within the artistic work itself. The recent photograph of the black hole gives us a reliable representation of a big unknown, closer in the background to the diffuse vibration of a painting by Mark Rothko. Those clouds of incandescent gases been expelled from the center of the galaxy, blur just like the red oil on the black canvas. Galaxies in the constellation of Virgo 55 million years apart from canvases painted 55 years ago. From the gigantic telescopic magnifying glass that forms half a terrestrial surface we look at the dark center of the galaxy in the same way that we face a concave and deforming mirror of Anish Kapoor.

We propose to the artists an exploration about the limits of the artistic language (visual, sound, performative, etc) that extends our way of understanding and perceiving Time and Space, and their intimate and relative relationships. Its infinity, its inappreciability. The visual, sound and haptic experience in short, as a hybrid and contemporary way of recognizing the increasingly diffuse physical and cultural environment in which we are, and as a privileged and direct way of noticing the liquid and unstable time in which we live, where we transform every day.

This dual exhibition is considered as an exploration whose purpose is to bring closer that horizon of hidden meanings, mediating its decoding and dynamizing possible dialogues:

– Among the selected works, leaving a space of relationship and uncertainty that rethinks the perceptive “tempo” of them.

– Between the spaces (and times) that the works of art generate and the exhibition space of the Sala Cero itself through possible specific spatial devices.

– Between the exhibition and a possible collective “space” of public debate through parallel activities that generate theoretical reflection and new readings of the project.

Trying to activate the exchange and cultural interpretation as a process of knowledge and putting into crisis of the already known, whose paradigm constantly mutates. Even though the only thing we receive in exchange for that supermassive hole of mystery is a luminous and diffuse shadow, as in the recent image of the EHT telescope looking at the center of Messier 87.

Architect, he works as a professional photographer, documenting architecture, heritage and works of art for various Spanish National Museums, and is currently a professor at the School of Design of Valladolid ESI.

His artistic work moves between photography, video art, sound and installation, and has been exhibited in Museo Patio Herreriano, La Casa Encendida, Cerralbo Museum, Laboratorio de las Artes de Valladolid and in art galleries such as La Gran. He also develops video and experimental film projects such as “Open Conclusion” about Jorge Oteiza, and has made “live-cinema” shows at the Sónar festival, at TedX and at the Archaeological Museum of Palencia.

As curator, he has carried out various exhibition projects at the National Sculpture Museum in Valladolid, such as a recent exhibition about Val del Omar, the VAC Foundation and the Ca’Pesaro Contemporary Art Museum, both in Venice, and his interests revolve mainly around space and the contemporary city from a multimedia and transversal perspective.

The Museum of Contemporary Spanish Art, Patio Herreriano, opened its doors in 2012 in the restored Monastery of San Benito. It contains a private collection that includes around 1000 works by Spanish artists from 1918 to the present. Throughout the year the program of exhibitions of artists of the collection is complemented by temporary collective or individual exhibitions with contemporary visual artists.

You must Sign in / Register to apply this Open Call 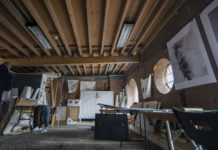 Liverpool Film Night 2016: FACT: Submissions of films in any genre

Call for artists’ response to the refugee situation