The exhibition also runs as part of The Cornerstone Festival. The title of the exhibition refers to Bick’s concern with dialogue, which he describes as a desire to visually contain uncommunicable elements in his art and its influences. To celebrate the exhibition, the artist will also be delivering a public lecture at the Capstone Theatre, part of Liverpool Hope University, on Monday 23 November at 19.30.

Continuing his ongoing exploration of abstraction, geometry and colour, Bick is exhibiting a selection of wall paintings alongside six framed drawings. Inspired by historical Constructivism and Concrete Art, Bick creates abstract work which both adheres to Constructivist grid models and teases them apart.

Since 2008, Bick has been working with two singular grid structures which have formed the basis for all his subsequent drawings and paintings. The artist begins with a digitalised grid format consisting mainly of triangular outlines, which he projects onto the canvas as a start point for the new work. He then transfers the lines onto its surface, choosing to keep some and remove others. As such the process is one of constant evolution in which the most recent works are an incarnation of the ones before. This systematic process is not however devoid of the hand of the artist as was the work of the Constructivist and System artists. Instead, Bick incorporates painterly elements into his multi-layered works, so that gesture and geometry are held in balance.

Conversation also illuminates the way in which Bick paints with historic artistic models in mind, placing them in a dialogue with his own creations. In particular, his experience in curating has informed his investigations into the potentialities of Constructive Art. Using the ideas of art historical research as a platform from which to both animate his work and engage with the work of artists, Bick develops responses that are at the same time generative, methodical and haphazard.

Andrew Bick (born 1963, England) creates multi-layered wax paintings that use various shapes in free and geneometric abstraction. The works contain numerous oppositions such as drawing and painting, transparency and opaqueness, line and plane, colour and non-colour, glossy and matt, and yet are come together masterly in a multi-factered inscrutable whole.

In 2014 he co-curated Conversations with Marlow Moss, for &Model Gallery, Leeds, in association with the Marlow Moss exhibition at Leeds Art Gallery. He has given papers for seminars at TATE, Leeds Art Gallery and Henry Moore Institute. Most recently Bick has delivered a paper for the seminar Staging Painting (ICA 21 July 2015).

Recently his painting was included in NOW-ISM: Abstraction Today at the Pizzuti Collection, Columbus, Ohio and other major public space exhibitions include Slow Magic at Bluecoat, Liverpool in 2009 and Structures, Willhelmshaven Kunsthalle and Newlyn Art Gallery. Since 2008 Bick has been developing projects based on research into British Construction and Systems Art from the 1950s to 1970s initatied as a result of a Henry Moore Institute Fellowship in 2007/08.

He has written for Art Monthly, the Brooklyn Rail, Kultureflash and Abstract Critical, and is currently Chair of the board of Tannery Arts London and on the advisory board of Drawing Room, London. 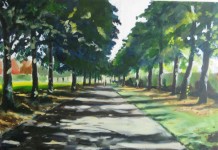 The Cornerstone: Flight to Arras

Cornerstone – ‘Self Observed’ by Jason Jones