These montages suggest a skewed portraiture, combining glossy, amputated imagery, proffering a ‘Sex in the City’ aspirational lifestyle, butted against a more down-at-heels DIY tabloid ‘celebrity’ of exposé. The combination of these publicly available sources offers up a disposable, almost one dimensional pattern, perversely seductive.

Handstands & Headstands features a gang of a tall, proud, bamboo lengths, driven into plaster, rooted into a plastic, fake terra-cotta plant pot. Lurid coloured fashion scarves are knotted around the phallic rise, implying their ability to mask an identity – a requirement of religion or a need of warfare.

Coursing through the centre of the space is Features Column. A barely tangible pallid green plastic membrane, originally made to wrap sweets in, drops in wide strips from ceiling to floor, clipped together with a series of everyday fasteners that hold small collages. The collages incorporate body parts and areas of flesh, severed from advertisements, reflecting how we are represented as aspirational eye candy in today’s media. The plastic acts as both a mirror and looking glass, setting up each side of the gallery and presentation as potential structures of artifice.

Other sculptural works in the show, such as Modern Muse (Bust), further reflect on the tension between representation, perception and desire. Unwieldy, organic plaster forms, covered with tacky latex, precariously balance on top of light-boxes, illuminating collages that no longer promote or sell anything whole. 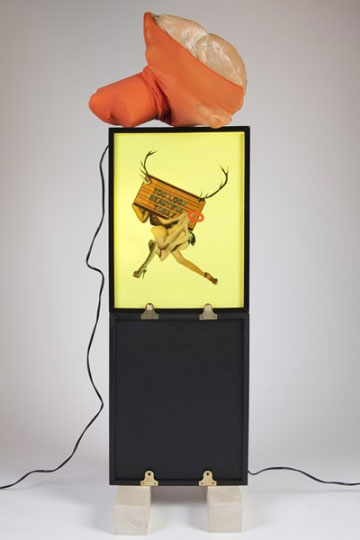 Ceri Hand – My Empire of Dirt