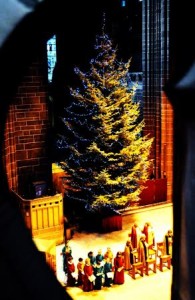 The Night before Christmas

Liverpool’s very own Ken Dodd OBE is set to join more than 250 children from schools across the city at Liverpool Cathedral’s largest ever Big Sing.

The Night Before Christmas Big Sing will see the famous poem – which tells the story of a man who wakes on Christmas Eve to meet St Nicholas – brought to life through music, the spoken narrative, dance and a whole manner of things quirky! The show will finish with a snow storm finale.

The event is free and open to all – but please arrive early to ensure you get a seat.

Stephen Mannings said: “This is our most ambitious Big Sing yet and it is also one of the first major outings for our newly-established Junior Choir, which is mainly made up of children that have taken part in previous Big Sings and wanted to pursue their love of singing. The Night before Christmaswill showcase everything that the children have learned and allow them to see what it is like to perform in a large scale concert. It will be a treat for the whole family.”

STARTS: A Life Not Sweet Anymore

STARTS – Names Instead of Numbers