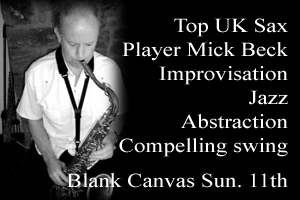 Legendary UK improviser, Mick Beck, will be promoting his latest release. On the free scene since 1980 as an improviser for all contexts from solo to big band leader, Mick is known for his energy and originality. His playing covers the full emotional gamut from heartbreaking to mischievous, and from abstraction to compelling swing.

Having recently teamed up with the fresh energies of Manchester’s Anton and Johnny Hunter to form a new trio, their music spans free improv, free jazz and much more; there isn’t much that they won’t touch or engage with.

Paul Pignon (London, 5 May 1939) is a British Stockholm-based performer and composer.

Pignon studied physics before settling in Yugoslavia in 1963, studying composition with Vladan Radovanović and becoming a founding member of the Radio Belgrade electronic music studio (1968). He moved to Sweden in 1983 in order to work at Elektronmusikstudion as an engineer and teacher, also assisting guest composers. Pignon curated concerts, radio broadcasts of electro-acoustic music and undertook researches in psychoacoustics, quantitative pitch analysis and spectral speech analysis. He also performed in ‘Interaction’ a free jazz group, and composed and wrote jazz arrangements.

EVENT: The Ballad of Juniper Davy and Sonny Lumière

EVENT: Winterland at The Bridewell