Last Thursday, Baltic Creative CIC celebrated its fifth birthday and launched a brand new exhibition space in the heart of the Baltic Triangle to celebrate. Art in Liverpool delves into the story behind Unit 51’s mysterious new neighbours…

Five years ago, Paul Rice and Claire McKeown were part of the team that launched Baltic Creative, an initiative to provide working space for the creative and digital sector as part of the regeneration of the Baltic Triangle. That same creative campus is now home to 65 businesses, housing many local artists and innovatorss from software developers and designers to those working in film and publishing.

Dedicated to their memory, the McKeown Rice Exhibit Space stands in the midst of the Baltic Triangle, and promises to showcase the work of a new and exciting artist every six to twelve months. Sculptor Laura Ford is the first artist to exhibit in the space, whose bronze cast sculpture has already been exhibited all over the world, travelling to Tate and the V&A Museum before coming to rest here in Liverpool. 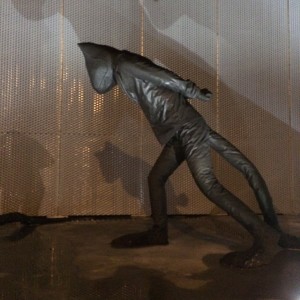 The piece, entitled Days of Judgement is inspired by Italian Renaissance painter Masaccio’s fresco The Expulsion from the Garden of Eden. In this  vision, however, the characters of Adam and Eve are reconfigured as a group of very tall, skinny cats dressed from head to foot in serious black clothing and cast into Bronze. Ford comments that “by pacing the floor, they appear to be in various states of anxiety and distress. Part cat burglar, part cartoon characters they not only evoke Dr. Seuss’s absurdist Cat in a Hat illustrations but also conjure something of T.S. Eliot’s anxious office workers in The Waste Land streaming over London Bridge wracked with existential angst.”

Since the regeneration of the area began, art has played an important role in the Baltic Triangle and thankfully that relationship looks set to continue. The area is home to many artist studios, practitioners and galleries, including Arena and 90 Squared, in addition to the offices of the Liverpool Biennial. In the past few years, the Baltic Triangle has also played host to events such as the 2014 Street Art Festival, Threshold and many exhibitions and art-inspired events.

Ford’s playfully sinister cat sculptures can be seen pacing around the Baltic Triangle for the next few months, and I look forward to seeing what will happen next at this unique new exhibition space.