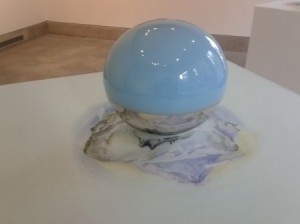 Currently showing at The Bluecoat Polly Gould is an artist who writes, based in London. She works with drawing, sound, video, photography, installation and performance. Often performance and video pieces will develop into written works and vice versa. Gould’s recent work has been particularly concerned with the spatialisation of memory, landscape and mourning. Along these lines she has published chapters in Deathscapes: Spaces for Death, Dying and Bereavement, Ashgate (2010), and Telling Stories: Countering Narratives in Art, Theory and Film, Cambridge Scholars Publishing (2009), and presented papers at conferences such as The Death Scene: Perspectives on Mortality, Brisbane (2009); Death, Dying and Disposal 9, Durham University (2009); Arctic Discourses, Tromsø (2008). Her solo show Peninsular, featuring installed print and video, and one-person performance Libraries and Landscape: Or what is it that I have lost? were both presented at the ICIA, Bath (2008). The same year she was selected for the Jerwood Drawing Prize. Recent group shows include Altered Sequence, E:vent Gallery, London (2009); Crossing Over: Exchanges in Art & Biotechnologies, The Royal Institution, London (2008); Utopia, Bergen Natural History Museum, Norway (2008). Her short story writing is represented in a collection of fiction by contemporary visual artists in Britain, The Alpine Fantasy of Victor B., published by Serpent’s Tail (2006). Since 1999, under the name of Eggebert-and-Gould, she has collaborated with Anne Eggebert on art and curatorial projects. This includes Nature and Nation: vaster than empires, their ACE funded group exhibition of international artists and associated publication, exploring legacies of botanical collecting and colonial histories in contemporary art. In 2010 Gould was awarded AHRC funding for her doctoral study ‘No More Elsewhere: Melancholia, Subjectivity, Landscape’, at The Bartlett School of Architecture, Universtiy College London.

Artwork of the Week – Richard Higham

Artwork of the Week – Stephen King