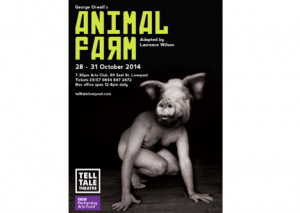 Tell Tale Theatre make a welcomed return to the dramatic world of George Orwell for their next production.

In 2010, Tell Tale’s very first show was a visceral performance of Orwell’s 1984. They have come a long way since then. Tell Tale Theatre recently received funding from the BBC Performing Arts Fund which will support the production and will enable Animal Farm to tour to local secondary schools.

The Tell Tale team have worked alongside award-winning writer Laurence Wilson to create their own theatrical adaptation of this world famous book, set on a timeless farm yard. Laurence Wilson’s credits include Blackberry Trout Face (20 Stories High) and Tiny Volcanoes (Everyman). This exciting collaboration and experimental writing process has led to a new theatrical adaptation of Orwell’s political fairy tale.

It is through the use of a powerful, physical ensemble approach that Tell Tale will realise Wilson’s darkly humorous, quick paced and biting script. The action will be underscored by original live music from local musicians Dave Owen and Benet Corkill. The two have been involved in the rehearsal process from the beginning and will perform during the show. Leanne Jones, Producer, explains “It’s wonderful to have talented musicians on hand who can respond spontaneously to direction and have added their own musical soundtrack to the drama. We are surrounded by talent, everyone volunteering, striving to make exceptional theatre. We are also very excited about the collaboration of emerging designers and students from LIPA, as well as our Tell Tale set builders John Gossage and John Bradley, who have worked together over the last couple of months to create beautiful scenery. John is a semi-retired engineer, contributing his expertise and skills. This is what Tell Tale is all about!”

Just as Orwell’s book has since its release in the 1940’s, this production will savagely remind you of the very real consequences of misplaced power allowed to thrive by ill-informed loyalty, and leave you reeling as the story reaches its terrible climax.

MUSIC Event – Above the Beaten Track