Frank Sully
B: 1898 – D: 1992
BRITISH 20th CENTURY
Frank Sully was a London based artist, one of three sons from a family of established London picture framers in central London called ‘Gilbert and Sully’. Sully’s studio was based in the lower middle class area of West Hampstead at 189 Sumatra Road which still stands today. Throughout his career Sully’s art varied in style, originally strongly influenced by the cubist movement and then moving mid career towards the impressionist path.

Sully exhibited works widely including Manchester, in an exhibition entitled the ‘Work of Living British Artists’ held at the Manchester City Gallery in 1927. It is thought at this time he painted ‘Christmas Eve Manchester’. The aim of this exhibition was to promote and sell the works of young, non-established artists to the general public through the seal of respected artist approval. The organisation of this exhibition was by Millionaire art dealer Sir. Joseph Duveen (Baron Duveen of Millbank (1869 – 1939). of the British Artist’s Association. He was aided by a committee of highly respected established artists, including the famous Jacob Epstein, Roger Fry and Augustus John. He also exhibited at the prestigious New English Art Club in London. 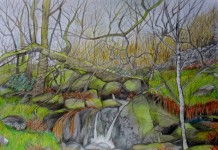