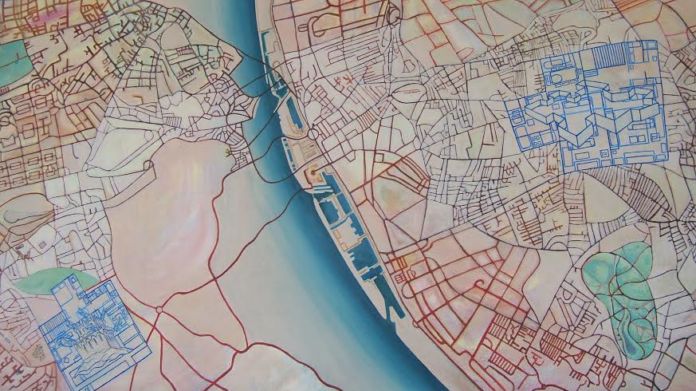 Jacqueline F. Kerr is a freelance artist and qualified teacher of Secondary Art and Design Education who is currently working at Tate Liverpool, U.K. She has exhibited nationally and internationally since graduating from Edinburgh College of Art in 1993 with a B.A.(Hons) Degree in Fine Art, specialising in Printmaking.

Jacqueline has work in collections including The Royal Scottish Academy, Edinburgh, The Italian Institute in Edinburgh and London and The University of Oxford as well as private collections. She is also represented through The Public Catalogue Foundation, London.

“The main inspiration for my current work is from a continuing interest in the history of map making, the art of cartography and exploring how these graphic methods and others, such as architectural blueprints or aerial photography, have been employed and continue to be used to visually represent the unique existence of a certain inhabited space within a certain period of time.

I’m interested in how different cultures and societies have endeavoured to record their ‘histories’ visually through their development of mark-making, signs, symbols, maps, charts and illustrative journals.

When I explore these interests I tend to use my original screenprints or etchings as a creative foundation to then create my mixed media artwork. I then develop the original image by combining ideas collected in sketchbooks, scrapbooks and photographs with drawing, collage and acrylic painting to realise the final piece of artwork on paper or canvas.

My artwork represents a visual travelogue, a fragmented but continuous journey, that has been taken or anticipated, that is real or imaginary.”

2015 Doesn’t look like a book, THE WILLIAMSON ART GALLERY AND MUSEUM, WIRRAL.

2014 This Is Not My Beautiful House, Tate Liverpool