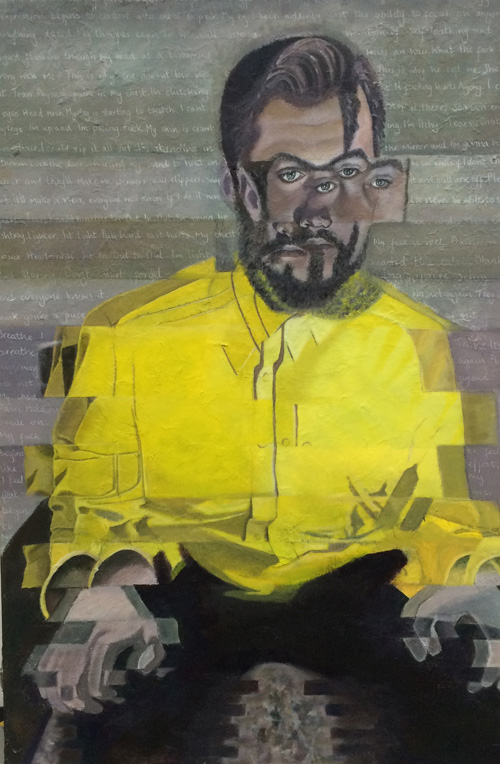 The majority of my work centres on portraiture and figurative drawing, using pencil, pen, inks and mono prints but mainly acrylic paints. Over the years my works have being mainly influenced my religion, sexuality and emotion, and the various ways these topics can be communicated to an audience. The primary intention of my work is to provoke an emotion in an audience.

My current work tends to relate to mental illness, depression and anxiety in particular, and the ways in which it can manifest itself. Statistics show that 1 in 4 people will experience some kind of mental health problem in their lifetime, ranging from mild anxiety right through to more serious issues such as bulimia and schizophrenia. However, despite the predominance of the issue, mental health has a stigma attached to it deeming it a ‘taboo’ subject. Through my artworks I not only acknowledge the issue but also attempt to depict the ways in which mental illness can contort a person’s perception of the world around them through the use of colour and composition from a first-hand perspective as this is an issue that is close to home.

My paintings are from photographs that I have previously taken; using Photoshop, I manipulate the colour and contrast of the images in order to convey a sense of mood and emotion. I tend to use a muted palette of blues, greys and greens in an attempt to communicate a feeling of misery and despair, along with the ghost like figures in order to give the painting a haunting feel. In addition to digitally manipulating the colour, I also distort, stretch and exaggerate elements of these images that I deem to be important to the final outcome, in order to create a kind of optical illusion. I combine traditional figurative painting with digital technology to portray a sense of mental chaos.

The figures in my paintings are depicted with a dull, blank stare in order to not only convey a feeling of numbness and emptiness, but also to depict a sense of desperation, almost verging on insanity. This is done with the intention of communicating Isolation and loneliness that the stigma surrounding mental illness can cause.