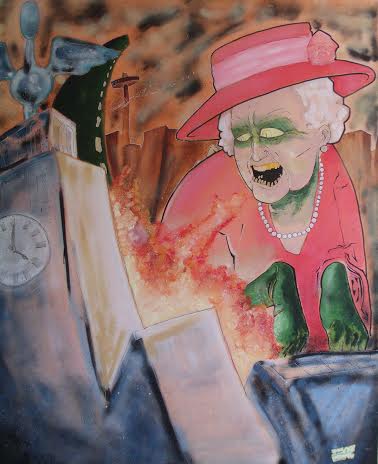 E-mail : tommygrahamart@yahoo.co.uk
Website: TOMMYGRAHAMART.COM
Facebook: www.Facebook.com/tommygrahamart
I’ve been a practising Artist based in Liverpool for over ten years. During this time I’ve worked as an animator on music videos, an illustrator for various companies and have had several paintings commissioned. In 2007 I began doing live paintings in front of audiences at various music gigs and festivals around the city. And in 2012 I won a live art competition to commemorate the Queens Diamond Jubilee. My painting of the Queen as Godzilla breathing fire over the the Liver Buildings won both the judges prize and the peoples prize. In 2013 I worked on the Black Duke of Lancaster Project alongside some of Europe’s best urban artists.
My work’s been described as ‘a darkly humorous, sardonic blend of comic book illustration and graffiti style graphics’. I guess that’s pretty accurate. I’m available for commissions, illustrations and live paintings.