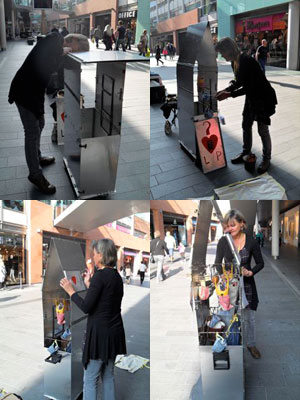 I’m slowly catching up on a few things that took place weeks ago. As part of the Independents Liverpool Biennial Charlotte Andrew brought her cart to the city centre for 4 days. She has kindly sent me her notes and conclusions which I reproduce here, it makes interesting reading.

Where is the Heart of Liverpool?
Liverpool ONE and St Johns Centre
08.10.2010 – 11.10.2010
Interactive Performance: Using a mobile, compact cart Charlotte Andrew will move between the St Johns centre and Liverpool ONE. Her aim is to collect anecdotes of the shift in the heart of Liverpool.

day 1
Liverpool one
Keys Court  opposite Next ansd Jigsaw. 31 drawings. Finished 2pm ran out of biscuits). Fair weather, sparse stream of people. I stopped passersby and asked them to participate, about 3 participants showed interest without coercion.

day 3
Liverpool One
Sunday, left Hotel at 11.15, videoed on route, arrived at 11.30 in South John St . Bright, warm, sunny day. Sunday is a ‘morning-after’ day, it’s hard work here. Nearly everyone has to be stopped. I’m feeling that shopping is self indulgent, they have a mission. Except for the men who are all leaning against doors and poles waiting outside the shops. It’s 2.15 and I’ve had enough.

day 4
Church Street
Monday, beautiful day, slight wind. Church St opposite Bluecoat ( I would like an art audience mix). Arrived 20minutes early, set up and immediately a manquestioned me, the second man drew but could not spell, he is not the first I’ve met here who walks about all day but can’t spell or write with ease. (? A literacy problem linked with unemployment). Today I have a sandwich with me so that I don’t get tired like yesterday, it is also a legitimate diversion when I get tired of putting myself ‘out there’. By far the friendliest area, people are occupied but not in a hurry, have time to share. Seats to sit, shops mixed, not all expensive ones and a broad thoroughfare. Time to sit and stare, and be curious. Interactive performance works on different levels at the same time. I am interested in the differences between people in different places. I also want to question the status quo and the presumption that a new shopping centre is the best way to spend EU money.

On one level it is looking at everyday life. On a personal level it has become a nomadic practice investigating public space and how it can be reclaimed with a mobile cart. The motive for doing this, is to test where, in this so called public space, as a member of the public I can stand and occupy a few square feet, carrying on my own business without being moved on.

in the past, following on from an event, I have made books which reflect on some of these aspects. This time I decided that the participants’ drawings would become the book without my intervention. I used four ring bound sketchbooks which are now ¾ full of drawings in coloured pencils with a brief written account of why they chose a particular area as the heart of Liverpool, with an L or T to identify locals from visitors (tourists).

Back in 2008, Liverpool was The City of Culture and as I watched the finishing touches on the smart, white,  architectural edifice that surpassed the function of shopping mall, it felt more as if Liverpool had created itself a new
world. The postal code Liverpool 1, was no longer derelict. How was the population of Liverpool going to adjust to this ‘super city’? It was immediately apparent what was to be gained; expensive real estate, up-market shops for the working man and women such as ‘Zara’, with prices to match, and a facelift. But who was it all for?

I expected to find in 2010, Liverpool One full of happy shoppers, but the expensive apartments empty and a stream of closed shops where there once had been an area of high footfall, especially Williamson Square. In other words – the derelict buildings had just swapped positions.

The weather was extraordinarily good and on the four days I positioned myself in Williamson Square, Church St and separate ends of Liverpool One, I asked people that stopped or passed me by what change had they found. Had the heart of Liverpool followed the shopping centres as they slowly made their way down the hill, till finally stopping just short of the docks?

The answers fell into surprisingly few categories and Liverpool One was not high on the list as the place in their hearts, but it was very full of shoppers. Not the chatty kind though, they had a purpose and they got on with it. The other areas were very different, often less full, but much friendlier.

Why was this? Has it something to do with our consumer side needing to capitalise on one’s time and money, be efficient and bring in returns? Or was it that Liverpool One attracted visitors from out of town? Or then again was it simply the seating? There were many chairs connected with coffee shops facing into the table at Liverpool One. Church St and Williamson Square had seats that could be sat on facing forwards or backwards, towards a friend or observing strangers going about their business. They were also open to the air, perhaps another rainy weekend they may be empty, but those sitting on them said they often would come and sit and see who passed them by. Maybe a neighbour from long ago, or an acquaintance. There was less need for an excuse to be out, just sitting was purpose enough. Many people admitted that they simply came out in the hope of finding company and did this on a regular basis. Others walked the same circuit each day, either visiting churches or shops, perhaps buying one item, but it was the habit not the shopping.

The last participant that stopped and talked to me, but did not draw, was a councillor. He had really come to check that I wasn’t selling anything or disturbing the peace. When I asked him how his council made decisions concerning the people of Liverpool, and whether he used a method to ask opinion of those it was going to affect most, he was open enough to admit that he didn’t, but suggested I might like to write into the council and offer my services!

So I leave with no conclusion drawn but a query as to the methods chosen by those who receive the subsidies. How are decisions made that affect the use of public spaces and how much discussion with the public that will be using these spaces ever takes place before the cogs start rolling?

I am looking at different levels of interaction – both private, public and personal and because of this it is difficult to draw one conclusion about the experience. It is also about who will speak to me and what they reveal about themselves or their city. I am able to move about freely if I make no money and hand out no leaflets – in this way I fall between categories of what is considered a nuisance.

Last chance to see Flashback: Bridget Riley at the Walker