I had a great weekend in Cork but have to say the city’s not exactly buzzing with cultural events. Lack of funding is mostly to blame I suppose but also its not a big place so there’s probably not a large enough number of practicing artists for an independent scene to thrive.
In Liverpool we have a plethora of listings magazines covering everything thats happening in the city, I didn’t see anything like that in Cork. I only discovered by chance the Capital of Culture Information Centre. I didn’t think there was one. Its not mentioned on the website or any of the official leaflets or in the Tourist Information (which is really a souvenir shop!).
They don’t even have the resources to open the Council run Art Gallery and Museum on Sundays (the Museum was even closed on Saturday). 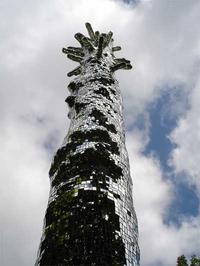 Still plenty to see over a long weekend though – The Crawford, the Launderette, the Fenton, the Tig Fili, the Triskel, Lavitts Quay galleries. The Glucksman on the University campus is an interesting modern gallery with some good exhibitions, the whole campus is a lovely place and is next to Fitzgerald Park where the Museum is which also has several public sculptures and this dead tree covered in a mosaic of mirrors. There was a quirky exhibition relating to vinyl in the old Christian Brothers School which was fun.
As there’s nothing open in Cork on Sunday (apart from shops, pubs etc.) I took the bus to the nearby picturesque harbour town of Kinsale. Quite touristy but lots of small commercial galleries, crafts shops, antique shops etc. for the wealthy.

Of course, I managed to visit just a small percentage of the thousands of pubs in Cork. Splendid places and all non-smoking! I always missed the local musicians playing though which was a shame. Every one I met was very friendly and helpful, I think I may have to go back later in the year.

Art in the Park – Calderstones

Draw the Line at Circo