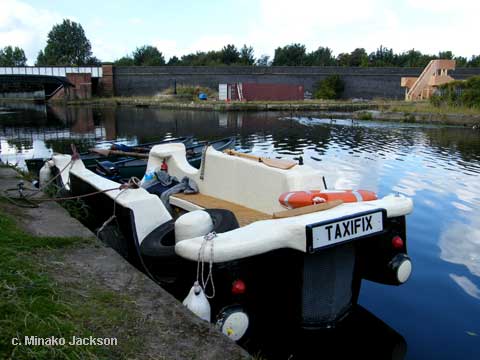 So we finally got to ride in the boat made from an upturned taxi on the Leeds – Liverpool canal and we saw a lot more besides, more than I expected to be honest as Urbanism09 opened.

We entered under a sign ‘Welcome to the Promising Land’ and through a maze built in front of St Winefride’s school on Merton Road, Bootle. Inside the school there is a large exhibition taking up several rooms and the hall. I couldn’t take in all the information, thankfully there is a 20 page newspaper-style publication to explain more. The exhibition relates the ‘Really Fictional Story’ of The Promising Land by Berlin based architects Raumlabor. According to this the area was owned by the Earl of Liverpool in the 18th century and was planned to be a park for the then Princess of Wales, Caroline of Brunswick-Wolfenbuttel.

So the park has been recreated in a way with England on one side of the canal and India with its Jantar Mantar in Rajastan a short swan pedalo trip across the canal. There’s lots morfe and all interesting historically as well as great fun.

From St Winnie’s we took the canal taxi to Bank Hall Marina, a.k.a. Portoallegro where there is more activity, several new floating crafts including Ben Parry’s floating mint teahouse and David Bade’s Chairity boat. There’s more exhibition space here inside some old containers and an outdoor area for music and screenings.

There have been artist talks at St Winnie’s today and a conference tomorrow. On Saturday 19 Sept there’s more activities and a parade along the canal in the evening. The exhibition is open throughout until Sunday 20th September. ‘Liverpool With a Line and a Twist’ at View Two