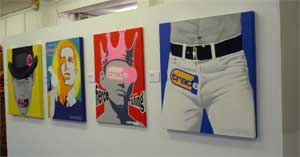 This exhibition is part of Homotopia 2005 and was opened last night. I couldn’t get there for the viewing so called in today to take a look. Apparently Trademark ‘created the visual identity for the legendary venues Heaven and Trade establishing his reputation as clublands coolest image maker.

Originally conceived as artwork for flyers, press ads and record sleeves, trademark re-creates his classic club works in bold acrylic on canvas illustrating how his ground breaking graphics have become icons of an era.’

I’m afraid I don’t know Heaven or Trade but there are some cool images which are very well painted. 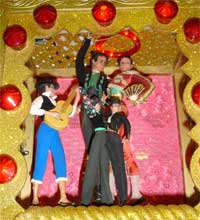 Also pictured here is just a small detail from a large cross full of figures and flashing red lights. Its called ‘Cruz Vestido’ but that’s all I know about it, its by Colin Holme. ‘Cruz Vestido translates as ‘cross-dress’, it houses 50 Spanish flamenco dancers of varying creeds, colours and sizes. Its a Kitsch celebration of camp union.

At Polished T until November 14th