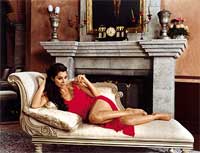 Apart from a few episodes of Brookside I’ve never watched ‘Soap Operas’ and these photographs reinforce my view of the complete awfulness of the genre. There is a difference though, these are Mexican Telenovelas which are very different from British soap operas. Instead of being shown several times a week for years at a time, they are shown every night for three or four months before coming to a dramatic close.

Stefan Ruiz’s photographs were made during 2003/4 at the television studios of Televisa in Mexico City. Known as ‘The Factory of Dreams’, Televisa is Mexcio’s largest producer of telenovelas or Latin American soap operas.
The pictures show the stars in posed portraits as well as during filming. There are ‘behind the scenes’ images of props, sets and crew, revealing how this fantasy world is created.

Although I dislike the TV programmes I found the pictures interesting. Some of the sets and the people are just so weird.
The Factory of Dreams by Stefan Ruiz at Open Eye until January 28th 2006