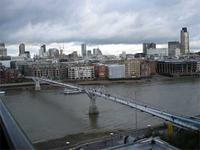 Back from London, lots to catch up on and a busy Autumn ahead I reckon. Spent most of the time just chilling in North London but spent a nice afternoon on the South Bank. As the London Design Festival had just started I thought the Design Museum would be buzzing but seems most of the events are happening later this week. Still there was an extensive display of surf boards!
Then walked along to the Tate Modern passing the Clink Prison, the Golden Hinde and Shakespeare’s Globe on the way. After several visits I finally remembered to make use of the Tate’s membership room with its terrace overlooking the millennium bridge and across to St Paul’s Cathedral, very nice. Didn’t bother with the Frida Kahlo exhibition, I’m not a fan and didn’t have a lot of time anyway. Also a shame there’s no installation in the Turbine Hall at the moment.

Exhibition at The Gallery, Liverpool