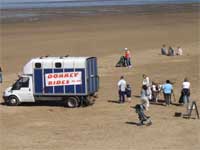 Another lovely summer’s day outing to Southport on Friday. Got there early to avoid the holiday crowds, good planning as it was packed out later on.
‘Take Me: I’m Yours’ is a group exhibition at the Atkinson Gallery until September 7th. The gallery has worked in partnership with art students and staff from Southport College, KGV (6th Form College) students and Lecturer/Artist Craig Atkinson to create this exhibition. Students selected work from the gallery’s permanent collection and created their own response to it. Both their source of inspiration and finished work are on display.
Its interesting to see works by artists such as Chagal, Elizabeth Blackadder and Paula Rego mixed in with responses by Degree or ‘A’ level students. There’s some fine work there in the 2 main rooms, one of the more peculiar ones is this monster duck-on-wheels thing by Cristopher Turrell. A full list of the artists and other details are on the website that goes with show – www.tmiy.com
Also on show at the Atkinson at present are five sets of prints by the Brazilian artist Ana Maria Pacheco which I really like, they are quite dark and dramatic illustrations of historic fables and such. (until Sept 10th)
In the area at the entrance are some large oil on canvas paintings by the Manchester based artist Margaret Cahill. Some of the paintings also incorporate photographs taken by the artist at an abandoned Soviet military airbase in Estonia. (Until Sept 17th)

Back out in the sunshine, spent some time on the beach and resisted the temptation to take a donkey ride, they looked miserable enough already without me sitting on them. There’s a nice new train/bus/tram/thing running up and down the Pier now but its much more fun to walk.

Tommy McHugh Features in The Times