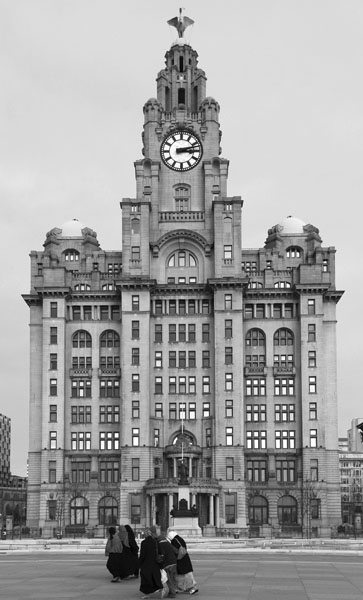 A new photographic exhibition, ‘Social Justice: Asylum Seekers’ by Anita Smith, is being shown both to coincide with the International Photographic Festival Look2011 and to celebrate Liverpool’s current theme year: ‘City of Radicals and Social Justice’. The Gallery Liverpool, Stanhope St, has recently formed a partnership with the Baltic Creative CIC, and this is one of three photographic shows on this theme curated by Fiona Dunn of The Gallery Liverpool.

One of the photographs features a large queue of asylum seekers outside Reliance House in the city centre, waiting to put their cases to the Home Office. Anita says this is a daily occurrence, and she was struck by the sheer numbers of those needing help. She says: ‘Each person has a story to tell of past fear and future hope; each has an underlying sadness that can be seen in their eyes. Many are just existing from day to day and sleeping rough until they can find somewhere safe to live.’

The view of the Liver Building was taken one day after speaking to Asylum Link Merseyside about why people become refugees in this city. Anita was passing, and sought permission to photograph those gathered there. This is an issue: there is often good reason to be fearful about images being published: some have fled for their lives, and publicity could endanger them or their families.

‘ Imprisoned for beliefs’ draws attention to those detained for reasons of sexuality, political ideology or religion, and does not show the person’s face. Also ‘Destitute and alone’, featuring someone who had slept on a box in the street for three days, is not identifiable. It is simply too dangerous.

Anita cites as an influence in this work London-born photojournalist Don McCullin, well- known for his war photography and images of urban troubles. These challenging images present a fresh perspective on an often maligned, misunderstood, disenfranchised and burgeoning group.

Her other work contrasts strongly, featuring graceful images of landscapes, which have sold widely through galleries and events, and through her own website (details below). So, this exhibition is a departure for her, depicting claustrophobic lives where there is little hope of freedom.

Anita has  worked as a commercial photographer, or the last 11 years, with clients throughout the UK.
She has exhibited in Liverpool, London and Edinburgh at the Stills Gallery and Open Eye, and also at several local exhibitions including the Albert Dock, The Gallery Liverpool and Blackburne House. For the last 8 years has also run an online gallery/ shop for local artists and photographers.

The Baltic Creative CIC  is an ERDF and NWDA Funded Landlord established in 2009 to provide creative space that meets the changing needs of the creative and digital sector. It is a stakeholder
in the regeneration of the Baltic Triangle. Baltic are working with Look2011 to site 3 x 20ft photo / Gallery Containers on the vacant land next door to 43 Jordan St.  For more information call Mark Lawler (Centre Manager) 07984 433257 or Fiona at The Gallery Liverpool 0151 709 2442.

Next Up for Liverpool’s creative talents – Liverpool Daily Post

‘Untitled for Now’ at Urban Coffee

Imogen Stidworthy ‘The Work’ at Loughborough

Icons in Transformation at Liverpool Cathedral