The latest exhibition at FACT, ‘Rock the Future’ consists of 3 works by Japanese artists. They are entirely separate pieces but there is some commonality, for instance, the use of the latest technology. I was able to talk to the artists before the show opened and I have to thank Minako Ueda for transcribing and translating the conversations. Any inaccuracies are entirely due to my not listening properly and even forgetting what questions I’d asked.
All images are copyright Brian Slater.

So first of all we have extra! by Ryota Kuwakubo in the Media Lounge.

I’m standing in a small dimly lit all blue room with no shoes on and up to my ankles in small bits of paper. A note floats gently down from the ceiling. I manage to catch it and it tells me ‘Next gen DVD rivals fail to agree’. A minute later another says ‘Civilian police staff on strike’. OK, what should I do now? Seems I can do what I like, its one of those interactive artwork things. Visitors are encouraged to take the slips of paper away with them or tear them up, leave them on the floor or (as I did with childish exuberance) collect as many as you can hold and throw them into the air.

The artist is known for making electronic gadgets such as Bitman (1998) and alternative toys and games for companies such as Sony. This installation involves less mechanics than his usual works partly because of the worry of maintenance issues as it has to run non-stop for 8 weeks and he’s only here for the first day. All the gallery staff need to do is climb up to the ceiling space to install a new roll of paper each day. The intention is not to clean up the fallen notes but to let them build up or flow out the door or whatever.

The idea came from a mental image of one piece of paper falling from the sky. There’s a story form the Edo Era (1603 – 1867) when the working class were protesting about poverty and the hierarchy. Then a piece of card containing a religious message fell from the sky. The person who found it disregarded its instruction and died. Naturally people thought his death was a punishment from heaven and thought they’d better behave themselves and be more faithful.
Now we are all swamped with information and its far more horizontal, its a web, a net, the TV and radio. Kuwakubo is attempting to make it vertical again by dropping the same information that we normally deal with mentally from above on slips of paper will we deal with it differently? The messages are all phrases from news websites (via RSS feeds) but at first glance can look like a line of poetry. Have you noticed the BBC normally use 5 words for their headlines?

In Gallery 1 we have ‘ikisyon 15’ by ressentiment. 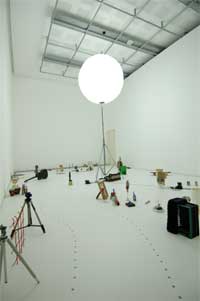 ressentiment wish to remain anonymous and they were still setting up their show until the very last minute before the preview started. In July they asked the local public to donate everyday objects to be part of the exhibition. These could be small items such as pens, cups, CDs or bigger ones such as plants, musical instruments, tv etc.

As you enter the gallery you are led along a winding path surrounded by these objects. This room is totally white and there is a large round lamp in the middle like a brightly burning sun. Amongst the objects are carefully placed rotating cameras and microphones recording not only the objects but also the movement and sounds of the visitors. At the end of the path is a doorway through to the other half of the gallery. Here you can watch a large screen showing the film of the items in the room. The voices of the people has been distorted so you needn’t worry that others will hear what you said but still its a bit disconcerting to know that you may be part of the artwork but that’s part of the point – more interactivity, this time between audience and viewer. There’s also manipulation of the images as some are overlaid with others, these sequences must have been pre-recorded and repeatedly mixed in with the live pictures. Some of the objects are interesting in themselves and have been arranged and juxtaposed by the artists with some humour.

Finally in Gallery 2 is ‘Shikakunomukuo (On the Other side of Vision)’ by exonemo.

Exonemo is a pair of artists, Kensuke Sembo and Yae Akaiwa who have been collaborating for a few years on projects involving the internet, computer software and live sound performances.
We have another slightly disturbing interactive audience/viewer thing going on here. There is a room painted in broad black & white diagonal stripes, there are 3 computers with graphics tablets. You are invited to use the stylus to draw a picture or doodle or write something but as soon as you apply pressure the lights go out and a brief but loud and strange noise is blasted from the loudspeakers. So the combination of striped walls, lights going on and off and weird noise excites the senses whilst you are trying to draw. Its meant to, also, being able to see as you draw can be restricting.

The word Mukou has 2 different translations: Null(void) and beyond. So this is the void bit – as you draw things disappear. Then beyond, in the other room the last strokes that you made are being displayed on the 3 large screens.
Each screen shows the last few minutes worth of drawings from the 3 pcs but they are not still, they float around and change size and shape. As you watch you can see what people inside are drawing, though if its busy you won’t know who drew what until they come out and say ‘Hey, there’s my picture! Cool!’ or some-such.

The images are also available online at www.exonemo.com/mukuo but if you access it from home you may have to install some java vm nonsense. I did but promptly deinstalled it as it was interfering with other stuff.

So overall, I really enjoyed the whole thing. Its interesting, fascinating even and fun. Normally I’m not happy about being part of the artwork but this is quite subtle, liberating rather than irritating. Of course I like the techieness of it and the spirit of play. Worth visiting 2 or 3 times at least.

If you can read Japanese you might want to take a look at Toyoko Ito’s review/interview on her excellent Fogless website
And Also Minako Ueda’s report on the cool Japanese based website all about Liverpool – scousehouse.net

Sharon Mutch and Renate Klein at The Lost Soul