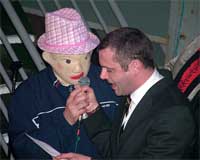 (Ian J. didn’t go, he’s too much of a coward even for custard pie fights!)

The New Year was welcomed in by Doll Man Disco. A concept conceived by Gary Sollars. This is the third event in the Doll Man Disco and brought 2006 in with an array of exuberant alternative events and performances. This has been on Walk the Plank a Theatre Production Boat based in Liverpool, England.

The background to Doll Man Disco evolved from a series of painting Sollars did on the concepts of ‘Doll Man’, a character created from a fusion of socio-cultural influences in contemporary society and popular culture.

The evening opened with music for everyone’s taste, a retrospective of the disco era. Doll Man, aka Sollars, stood aloft behind the DJ box wearing track suit and mask and adopting the persona Doll Man.

Through the night Sollars introduced and orchestrated the diverse characters and performances, ranging from myself as Bunny Girl (Gaynor Evelyn Sweeney), Dorrie Halliday astonishing the audience with her Burlesque routine, Cath O’Shea’s stunning rendition of You’re my World (Cilla Black), and Sean Kenny and Doll Man’s extraordinary duet of Welcome Home (Peters and Lee). Further events transpired through out the night of a custard pie fight open to eager and willing volunteers, the yee-yah collisions of circle dancing and speed bingo. George Lund acted as bouncer earlier on in the evening, but transformed to become the Funky Chicken as Croupier later on in the night.

The guests were invited to dress especially for these New Years festivities and adorn wigs on the turn of midnight. This made the performance expound to the audience to become part of the Doll Man mania. The entire evening was fusion of creative performance, fun and merriment. A bizarre and wonderful experience for all and rapidly earning folklore status!

Keep an eye out for the next to be advertised! For further information, please email Gary Sollars at itsgarys@hotmail.com.

JJ Audubon – The Birds of America